Google pushed out its G+ iPhone app today a little bit too fast. It was buggy, crashed, and kept spinning in circles. In fact, it was so buggy that Google has already pushed out an update, which is the fastest update to an iPhone app I’ve ever seen.  Google+ Mobile product manager Punit Soni says that the first app was actually a test version that was released by mistake, and the new update should fix many of the stability issues. So if you have already downloaded the app, delete it and get the update. 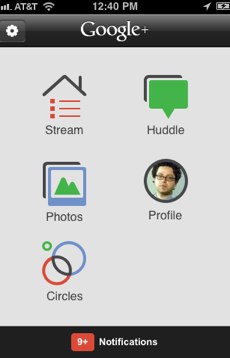 I downloaded the buggy version and found many of the same issues Robert Scoble complained about (it crashed, kept logging me out, froze, etc). After downloading the update, I couldn’t sign in until I powered down my iPhone and started again. But now the app is much more stable and I can actually try it out.

The iPhone app is designed to let you see your Google+ stream, photos, Circles, and Huddle with other G+ mobile friends and followers.  The stream still seem a little bit slow to load, but that may be because I have a pretty full stream already. You can swipe between your Circles, Incoming (posts from people who follow you but you don’t yet follow), and Nearby. You can geotag posts, which is great. A big feature that is missing is that you can’t share posts in your stream. Soni says that is coming for both Android and iPhone. All you can do right now from mobile is comment on posts or +1 a post.

The Photos feature lets you see just the photos in your stream and upload photos from your phone. This feature is key for mobile, but it doesn’t automatically sync all photos on your phone to Google+ in the same way that the Android app does (and iPhoto will once iCloud launches). 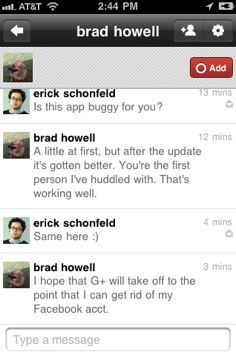 The other key feature is Huddle. Like the Android app, it lets you “Huddle” with other people on G+ mobile.  A Huddle is a single or group text chat. Anyone can request to Huddle with you as long as you both have mobile G+ apps. My first Huddle was with Brad Howell, someone I ran Cross Country with in high school who saw me playing with the app. It wasn’t Scoble or even MG. To me that is a good sign. Howell says, “I hope G+ will take off to the point that I can get rid of my Facebook acct.”

Once you are in a Huddle, you get new messages as notifications if the app is closed. But otherwise, you don’t get notifications of Huddle requests until you launch the app. That seems like a bug. The notification counter, however, does register every time someone adds you to a Circle, which can become noise for some users.

Despite the false start, Google picked itself up quickly. The mobile app is an improvement over the browser-only mobile Web app, which is pretty solid in its own right. My biggest issue with it right now is that my stream still tends to choke up and freeze, although not as terribly as at first. I’m sure the speed freaks at Google will keep improving the performance.