Location-based services and increasing smartphone sales are leaving their mark on the mapping world: mobile-based map access is up significantly, while access from “stationary” points (i.e. desktop and laptop PCs) actually dipped slightly.

It’s not particularly surprising, but the rate of growth is remarkable. Mobile use increased by 39% year-over-year by Comscore’s measure, but access via apps doubled. This suggests a nice halo effect from local-knowledge apps like Foursquare and Urban Spoon. Mobile browser use also increased, but I suspect that the gap will only widen, or the two will become difficult to separate; do web apps count as web or app?

At this point I think it’s a relatively safe assumption, given the still-primitive state of many mobile web browsers, that this mobile-browser map use is actually web-based, for example accessing the web interface via an embedded map on a restaurant’s website after Googling (or Binging) them. As this behavior is damaging to the standard “division of labor” on smartphones, it will likely only decrease due to more forceful redirection of web maps to the native mapping app (if compatible, which is another issue altogether). Mustn’t sent a browser to do an app’s job, or vice versa. 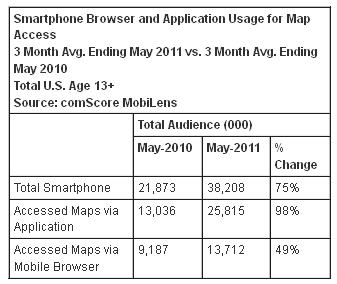 Comscore’s data also shows that nearly 90% of map users selected “driving” as their mode when requesting directions. This measurement is probably useless, considering that driving directions are selected by default in many cases, and at any rate are often identical to walking directions. I’d be interested in seeing how public transit is being looked up, however; the bus and metro apps I’ve seen are quite good, but the public sector might want to move in on them before they hit critical mass.

One methodological problem that is sure to present itself in the next year is how to quantify passive map use. An increase in active tracking (though the user is not actively requesting, hence passive) while a device is idle is sure to show this coming year, and it may throw traditional measuring methods off. Apple and Google are not likely to miss out on the possibilities of passive location tracking (indeed, Apple seems to have already begun the festivities), and there are already plenty of apps (for instance, fitness and pedometer apps) forming the vanguard of this wave.

The dip in PC mapping is more difficult to analyze, however; PCs have more or less saturated the US market, but the standard of entry to “advanced” categories of browser and PC use (the computer illiteracy of the market can’t be underestimated) is ever dropping and I would personally have expected continuing slow growth in web map use given steady sales and access numbers. The continuing rollout of decent broadband would tend to increase these usage numbers as well. But it seems that this period of rapid smartphone growth has pulled more people from the PC pool than enter on average.

It’s a pity this data isn’t richer — knowing the app breakdown, success rate, exit rate, and so on would be interesting data for number crunchers.