It’s been some time since we heard from UJAM, the music startup that launched (and was runner-up) at TechCrunch Disrupt NYC 2010. The service launched in a private alpha last May, and quietly opened its doors to the public in December. And since then, nada. But now they’re back.

The reason for the quiet, says UJAM cofounder Peter Gorges, is that the company has been heads-down for the last six months, overhauling, tweaking, and polishing the UI to make it more accessible. Gorges explains that when it first launched, UJAM was really a lot of nifty features with a functional, but not especially easy-to-use, UI. Part of that, he says, was because UJAM’s founders have been working with music professionals for so long that they may have expected too much of their users. This revamp should help change that.

The promise of UJAM is that it theoretically lets anyone create a song — complete with sweeping background soundscapes if you want them — simply by humming a tune. So it makes sense that biggest change to UJAM is the introduction of the UJAM Wizard. This is a new series of steps that holds your hand through the song creation process, from the initial melody (which you can hum or sing), to choosing a style, to editing each note and crafting the song structure.

Among the other improvements: the style selector, which lets you choose whether you’d like to make your song sound like soothing jazz or grungy rock, is now easier to use. And the whole UI just looks a lot nicer.

Is it easy to use? I tried whipping up a song and ran into a couple of hurdles — for example, it wasn’t immediately apparent how the song form step actually impacted my recording (it’s obvious that you’re choosing where to put the intro, chorus, and verses, but it isn’t obvious as to what that’ll actually do to your recording). So yes, there’s still a bit of a learning curve. But that’s a problem that’s inherent with any kind of music creation software: if it’s too easy you wind up with highly generic mush, and if it’s too hard nobody will use it. Even if UJAM hasn’t perfectly hit that balance just yet, it’s getting closer. And they’ll be releasing video walkthroughs to help.

UJAM is currently still based on Flash — Gorges says that there isn’t enough support for audio APIs to switch over to HTML5 yet — but down the road the company intends to make the switch. Another thing to note: as the site becomes more powerful and user-friendly, it could fit in well with the push toward moving advanced, traditionally desktop-based applications to the browser (a mission that’s spearheaded in part by Google, which wants powerful web apps for its Chromebook project). Put another way, UJAM could eventually become the GarageBand replacement for the web. 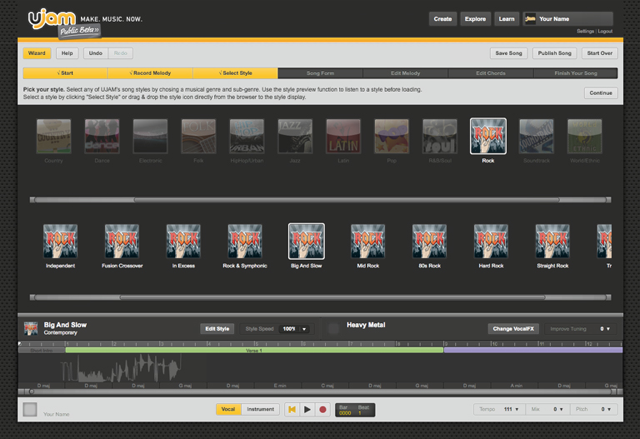