Today, during the earnings call about Google’s great Q2 2011 results, CEO Larry Page kicked things off. While this was technically his first full quarter as CEO, he got some flak during the last earnings call for only saying a few sentences. This time, he went much further, even sticking around for the Q&A session. He also did something really cool: as he was on the call, he posted all of his opening remarks to Google+. Yes, he live-Google+’d his own call. Talk about eating your own dog food. Awesome.

We’ve already posted on some of the key numbers Page shared: the financials, Android activations & numbers, and Google+ numbers. But there were a few other interesting tidbits in his remarks. Namely, he’s clearly enjoying the early success Google+ is seeing. He also believes his re-organization of the company is already paying off (though we can’t see all of the benefits of it yet). And he wants to make it very clear that his leadership of Google will be fiscally responsible.

When talking about some of the “speculative” projects that Google is working on (such as driverless cars), Page notes, “we’re very careful stewards of shareholder money — we’re not betting the farm on this stuff.” He goes on to say that they also don’t do things they don’t think could be massive opportunities. “All of us at Google want to create services that people across the world use twice a day — just like a toothbrush!”

Here were the key takeaways from Page’s remarks in his own words: 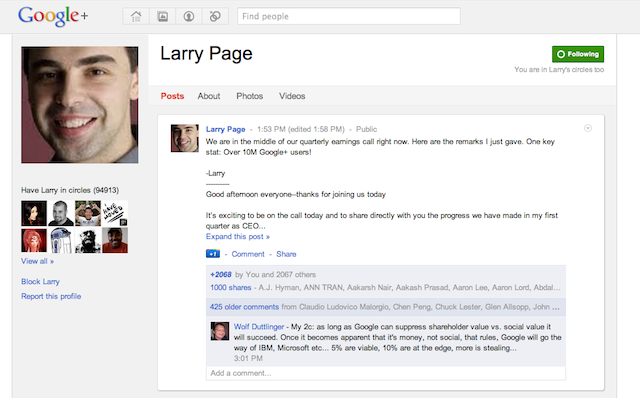