Uh oh. Now you’ve done it. You’ve lost your audience. The crowd that was once hanging on your every word and gasping for breath between laughs is now sending back nothing but vacant stares. A few people just snuck out the back door, and you’re pretty sure that dude in the back row is snoring. Where, oh where, did things go so wrong?

A new app called Ovation is trying to help productions of all sorts (both live and online) figure out exactly where things start to suck, with a tool much like that used to gauge audience responses to TV pilots. It requires no downloads, and no sign-ups on the user’s part. Oh, and it’s totally free right now.

The idea is simple. So simple, in fact, that it’s easily described in two pictures.

First, you create a URL for your event. You give your audience that URL, which they load up on their smartphone. This is what they see (here’s an interactive demo): 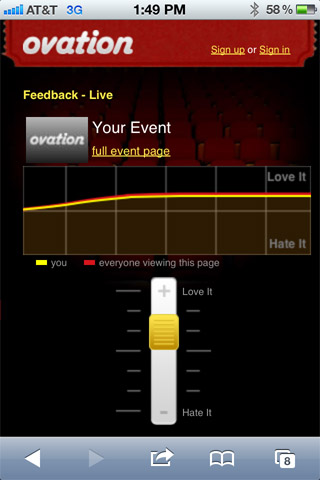 Members of your audience then use the on-screen slider to provide feedback. If they’re loving a certain section, they slide the bar up. If they hate it? They slide it down. Simple. There’s no signup process, and, as it’s a web app, it works across a ton of smartphones and mobile devices without any sort of installation.

As the event unfolds, users see a real-time time line of their feedback thus far, with a second line showing the averaged response of everyone participating. After the event wraps up, you can peruse all of the feedback data in an interactive, second-by-second plot graph (demo here) like the one below:

The whole thing is executed well, and the idea itself is great… if they can get people to use it. Though the horribly impolite patrons of my local theater tend to forget it, there’s quite a stigma around busting out your phone during events (mainly because that bright screen is like a little tiny flashbang grenade when used in a dark theater). Even if the folks behind the production request that people provide live feedback, I’d imagine some folks would innately hesitate to do so.

Another bit they might consider tweaking: it might be nice for the second line — the one that shows the average opinion of all participants — to be optional as set by the event coordinator. If user A loves something but sees that everyone else hates it (or vice versa), they might taper their response a bit for sake of going with the grain.

The whole service is entirely free during this initial beta phase, but it’s also currently limited to 10 simultaneous responders per event. Need a bigger sample group? The team says they’re willing to help out.

Not much of a live performer? Prefer to sit in front of your webcam with your bed sheet pinned to the wall and rant about why Ryan totally should have been kicked off of So You Think You Can Dance? Ovation also has an online video version of their tool, which applies the same gauging tools to videos posted on Youtube, Vimeo, or through their standalone player.

So, the big question: would you use it?