Short version: Looks good, sounds good, fits… okay. It’s not for marathon gaming or all-day use, but the Chimaera is a solid headset for home gaming. Nothing out of the ordinary.

Really quick: the Chimaera comes in two flavors, the $129.99 stereo version (which is what I have here) and the $199.99 virtual surround version (which I don’t have). You can see a comparison here, but what you’re missing out on is virtual surround (questionably useful but occasionally nice in games), digital optical and RCA in, an on-device equalizer, and an improved, 5.8GHz wireless transmitter (should have less competition on that frequency). So, onwards.

The Chimaera is a large, plastic-y production, with deep cloth-lined earcups trimmed with leather. There’s a flip-down mic on the left earcup that is flexible and positionable. Both earcups have four buttons on them – mute and power/sync on the outside and audio/mic volume on the back. 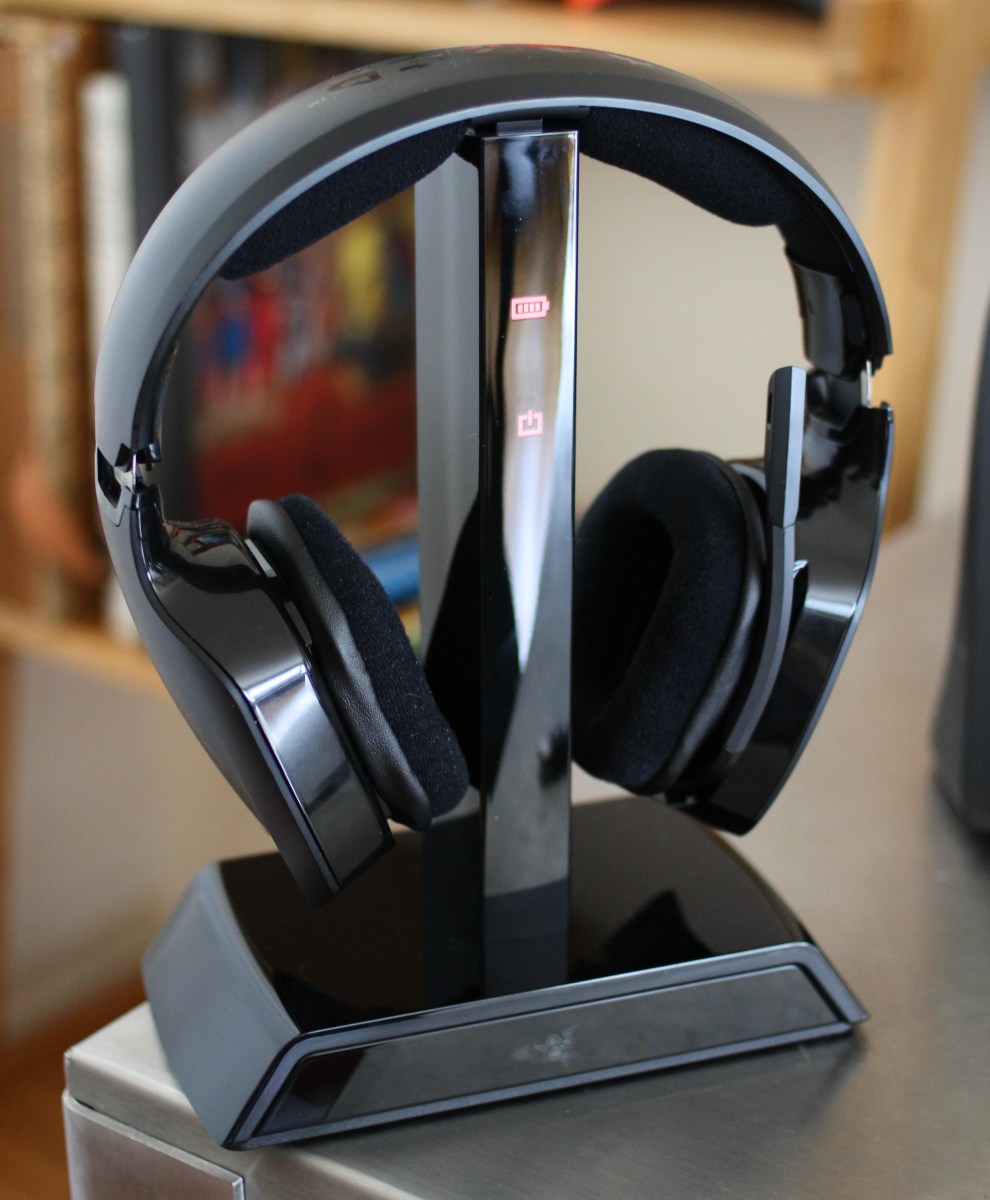 Connected to your 360 or PC is the combination charge stand and transmitter. Again there is no attempt at miniaturization (as opposed to AKG’s, for instance); it’s more of a display stand, meant to be prominently placed. On the stand you’ll find on-off and sync buttons, and (in the stereo version’s case) a single 3.5mm input. It has to be plugged in — no USB here.

Now observe this picture and tell me whether you think these are a little large, or if you think I just have a tiny head: 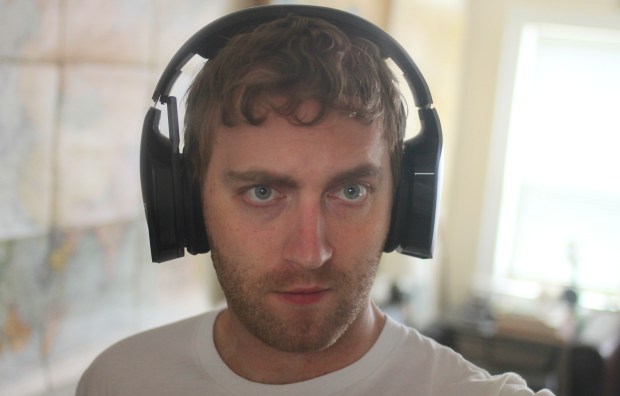 No, I’m pretty sure these things are huge. They’re not particularly heavy, for their size at least, but they do feel big on your head. The fit is hit or miss: there’s not a lot of latitude in how your head can be shaped for these things to sit on your properly. In my case they tend to grip me far more tightly above my ear than below. It’s not quite to the point where it breaks the seal, but I can definitely improve the sound by pressing them in a bit at the bottom. I didn’t have this trouble with a similarly large pair of headphones, the Logitech G35s, which fit very well despite their size.

Sitting them on their stand is super easy and I never had any trouble getting the charge to start. It displays its status prominently on the stand; there’s no tiny LED to look for. Razer claims 12 hours of battery life from these, and while I didn’t time it carefully, I’m quite sure I got at least 8 of them, and I didn’t take it down to the point where they shut themselves off. They shut off automatically if there’s no input for 10 minutes, so no need to worry about manually shutting them off if you have to run out. 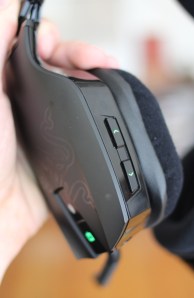 I found the sound to be good, but rather heavy on the bass, which was right up front and tended to overpower other parts of the soundscape. Generally this isn’t a bad thing in games, but it’s a pain to have to re-EQ your music when you’re wearing them. Isolation would be good if they fit your head correctly, so mileage will vary there.

Range is as expected for a plain RF transmitter: you’ll want to be within 20-30 feet with no walls, and more than one wall (in my experience) tended to break up the signal.

There are a lot of buttons, only a few of which you’ll be using with any frequency. The mute and mic mute buttons are well enough, but the Sync button is very prominently placed for such a seldom-used function. The volume buttons on the back of the cups control volume (on the right earcup, very handy) and mic volume. Instead of the latter, I’d have preferred media control buttons like those on the G35 and others. When you’re connected wirelessly to your computer or hi-fi, it pays to have a remote on your head. But as these are also very 360-oriented, it’s an understandable omission.

The stereo Chimaeras overpromise, I think. Their bulk is somewhat off-putting, and sound is a mixed bag — good for games, a little too bottom-heavy for music. For an all-purpose PC headset, I’m not convinced it’s worth the $130, though it’s more in its element leaning back on the couch playing 360. Unfortunately there’s a lot of competition here, and decent headsets like the Gamecom are available for far less. The surround-sound Chimaera sports more features and of course virtual surround, which sets it apart from the competition, but the stereo version is in a rather awkward position. Check out the more expensive version or save a little cash and get something with less pomp.