Many mobile app developers share a significant problem: getting their products discovered among the hundreds of thousands of apps i.e. the App Store or the Android Market currently boast. According to a recent report by Nielsen, just 58% of smartphone users actually use the stores on their handsets to search for new apps.

Enter MobileApps.com, which officially launched today and describes itself as an advertising, discovery and distribution network with three distinct value propositions for end users, developers, and publishers.

For end users, the MobileApps.com serves as a destination that currently lists 500,000 apps (around 2,000 are hosted on the site) for iOS, Android, Blackberry, Windows Mobile and other platform in a collected setting (this so-called marketplace works much like GetJar and similar sites).

With every download, developers are pocketing 95% of the price in the case of non-Apple apps (MobileApps.com takes the rest). Developers can import their own apps from other stores to claim and publish them on the site “in 60 seconds”.

Probably the most interesting element of MobileApps.com is that it’s an advertising network for mobile apps: the site is offering “smart widgets” that showcase specific apps to publishers: website owners, for example, can incorporate those widgets into their pages and customize them (based on different countries, keywords, categories etc.). 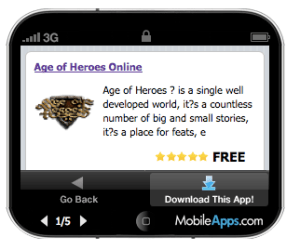 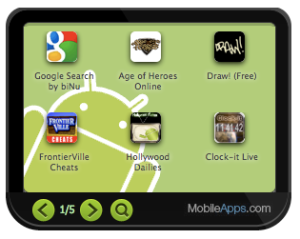 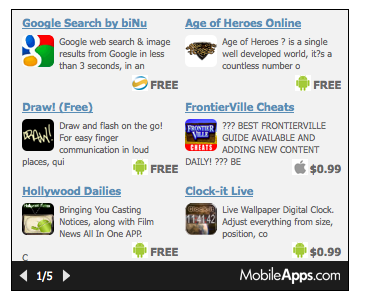 The idea here is that these “mini app stores” are targeted to people visiting these websites, making the apps on offer more relevant (and less intrusive) to users – apart from boosting sales. That way a travel site, for example, would offer just travel-related apps within the widget.

Much like Adwords/Adsense, the position on the widget is determined on a bidding basis through a self-service tool. And just as Google, MobileApps.com gets 38% of the amount the advertisers (developers, branded app owners) pay for the position (click here for more information on how the advertising system works).

MobileApps.com is incorporated in Singapore and just received US$400,000 in funding from Tokyo-based mobile company I-FREEK [JP]. The company’s main competitor is US-based AppTap.