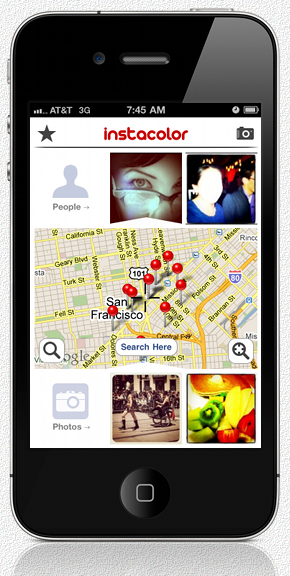 If photo sharing apps Instagram and Color would mate and have a baby, it would likely look something like the Instacolor app made by tinkerer Rakshith Krishnappa.

Basically, the app aims to help Instragram users discover other users in their neighborhood, and lets you view photos posted by people around you in real time.

The app can be downloaded from the App Store now and costs $0.99.

Ever since Color launched its photo sharing app, the $41 million startup has been having a rough time. Co-founder Peter Pham left, or was fired, according to CEO Bill Nguyen, who also told the New York Times that the company is going back to the drawing board.

Their biggest challenge right now: nobody seems to be using the app.

Instagram, meanwhile, is on a roll. They’re at well over 5 million users now and roughly 100 million photos have been shared using the app to date.

Earlier this year, Instagram debuted a realtime API to let third party developers build things like Instacolor, which takes both ideas and morphs them into one app (but uses Instagram as the foundation). Krishnappa also built Gramfeed, a Web interface for Instagram, by the way.