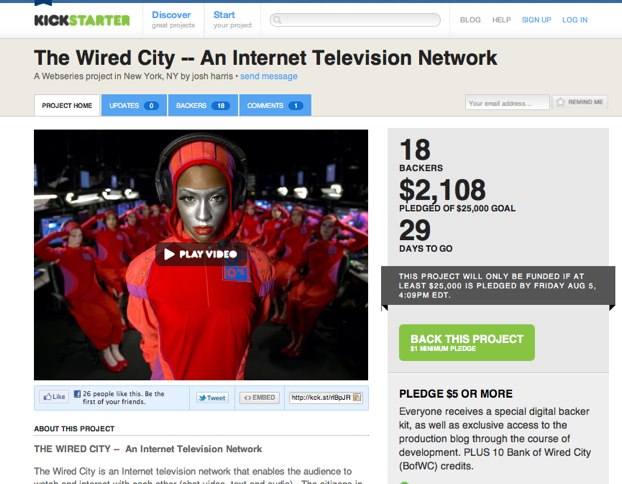 For the past year, Josh Harris has been trying to get funding for his Wired City concept. It’s a crowdsourced Internet TV station where all the viewers are also the broadcasters, multicasting to each other and the World Wide Web.

If this sounds a little like the documentary movie We Live In Public that is because Harris was its subject. He also founded Jupiter Communications and Pseudo a decade ago, but he’s a little bit eccentric. His ultimate vision for Wired City is wild (check out my interview with him from last year below). Harris once told me that all he needed was $50 million to build it. I suggested he might want to start with a smaller, less expensive piece of it to prove it out.

Now he’s taken his idea to Kickstarter, where he is trying to raise $25,000 to build a “net television pilot.” That will probably be enough for the uniforms, and might help him secure some angel money to get a real production going. “More importantly,” he tells me, “it is a litmus of audience interest in the thing.”

In it’s first day, the project has already raised $2,108. I bet he could raise the entire $500,000 on Kickstarter if he wanted to. It’s perfect for Kickstarter because it’s kind of half-movie, half-Internet startup.

You won’t get any shares in Wired City for contributing, but you will get “privileges for being a founding member,” including a “day of cyber-living on the Wired City set (non-transferable)” and maybe even a “Wired City cadet bandana.” If you pledge $2,500 or more you get:

Well, what are you waiting for?