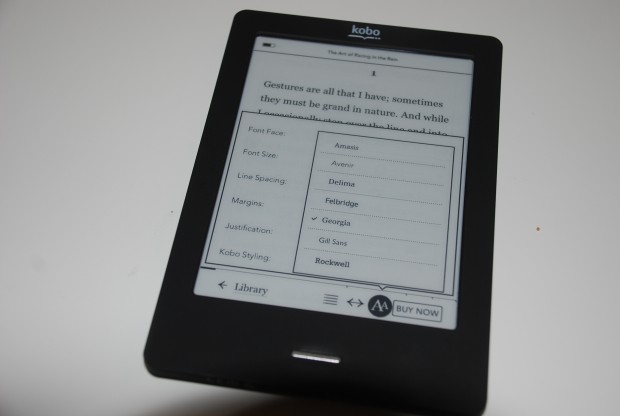 We had mixed feelings when it came to Kobo’s Touch Edition eReader. Specifically, we felt that the device was “not really a better reading experience than other devices (though not a worse).” However, that sentiment might change since the Kobo eReader Touch Edition is getting an update, which should bring with it some cool new customization features.

Basically the update will give users the ability to add their own fonts, and create new fonts on their laptop which can then be synced over to the Kobo eReader. The Kobo eReader Touch Edition is a pretty simplistic device, so chances are a lot of Kobo owners aren’t necessarily what we’d call tech savvy. If you happen to be one of them and the idea of side-loading fonts seems scary, no worries. You’ll still be able to customize your Kobo’s font by choosing from the five fonts that will be included in the update: Amasis, Delima, Felbridge, Gil Sans, and Rockwell. That brings Kobo’s on-board font offerings to a total of seven fonts, across 25 different sizes.

The update will also bring line-spacing, margin, and justification control to the Kobo eReader Touch Edition, along with the ability to turn off Kobo styling altogether. It’s worth noting that Kobo’s greatest competitors, the Kindle and the Nook, don’t offer the ability to add fonts. The whole point of an eReader is to find a convenient, space-saving way to enjoy books, and customizable fonts sounds like a great way to improve the experience. Maybe the Kobo could be a “better” reading experience after all.