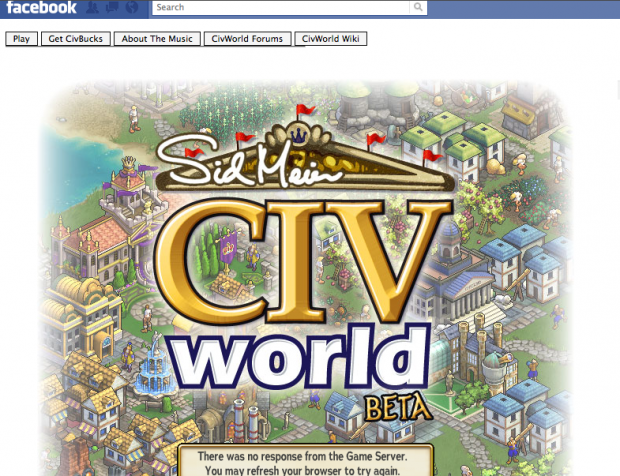 Back in May, we reported that Sid Meier’s Civilization game would be migrating over to Facebook under a new name, Civilization World. Today, the Facebook game went live in its beta version, and we’re more than excited to get civilized.

While maintaining the same basic game structure, CivWorld will bring a social element into the game, giving users the option to join teams and rule the world as a group. And who doesn’t love a good oligarchy? Plus, CivWorld is free on Facebook, as opposed to the $40-ish price tag slapped onto Civilization V. In my opinion, the most exciting thing about CivWorld is that we’ll be able to dominate the world with real-life friends.

There’s just one problem: the game won’t load. As of now, the error reads: “There was no response from the Game Server. You may refresh your browser to try again.” Hopefully, the folks over at 2K Games will get this situation squared away so we can check out the next in Sid Meier’s genre-defining Civilization series.

Update: Seems to be working now, albeit slowly.