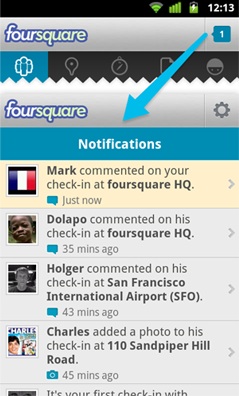 Over their history, Foursquare has been an iPhone-first company. The app initially launched on the iPhone back in 2009, and new features have typically rolled out to iPhone first. But with a new feature today, Foursquare has shaken things up, going Android (and web) first.

But again, just as interesting is the new Android-first approach. As Foursquare notes:

People in the Android-iverse, you’re first to play with this; download today’s update to get started. For the rest of you, head over to foursquare.com to see what it’s all about (just click on ‘notifications’).

At the bottom of the post, Foursquare reiterates that this feature is Android and web-only for now, but promises that iPhone and BlackBerry users will get the new feature “as quick as possible”.

Foursquare has hardly been the only major app to focus on iPhone-first over the years. In fact, many of the major ones still do. This perplexes some people since Android has a larger overall market share. Might this be a sign of things to come for other companies? Or was it simply easier to complete and push out this particular feature for Android this time?

Update: I asked co-founder Dennis Crowley about the new Android-first approach, and he said, “Android needs some early-access love!” “We worked hard as a company to make it so different products are paced differently on different clients — so it’s not always iPhone, Android, then BlackBerry,” he continued.

“Plus, it gives us a smaller subset to test on,” Crowley also said noting that the team is at a point where they’re “CRANKING”. He also hinted that we should expect more pushes regularly.