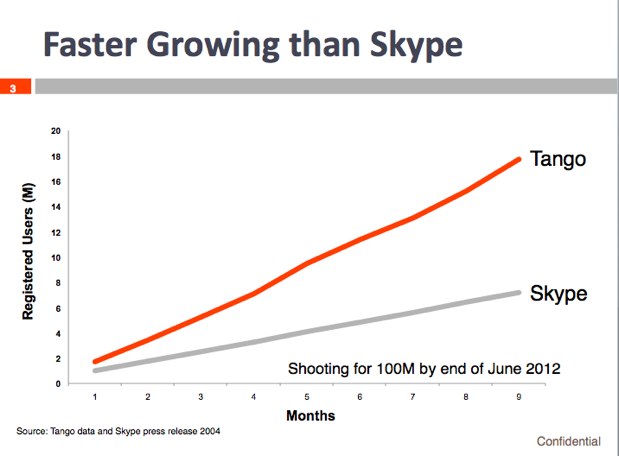 Back in Skype’s early days, it was adding users so fast that it liked to boast that it was “the fastest growing, globally available communications tool in history.” Well, by at least one measure (registered users 9 months after launch), mobile video chat service Tango is outpacing Skype. Tango now has 17 million registered users across both Apple and Android devices, only 9 months after it launched. By comparison, Skype celebrated 9 million users on its first birthday back in 2004.

Today, Skype has more than 600 million registered users, so Tango still has a long way to go. But the company wants to reach 100 million users over the next year. (Don’t we all?). If it does that, it will certainly earn the title of fastest growing communications tool.

The number of active users is 5.5 million in the last 30 days. Tango’s peer-to-peer service is handling 2.5 million minutes worth of calls every day, and the average call is 4 minutes.

Tango came out just as Apple was spending millions of marketing dollars promoting its own mobile video chat feature, FaceTime. Whereas FaceTime only works between Apple devices, Tango works across platforms on both iOS and Android. That cross-platform compatibility really helped drive growth. Downloads are split 50/50 between the two, and Tango is the No. 6 most popular free social networking app for the iPhone.

Tango already has 56 employees, and is building an engineering team in China, where it is also growing among users. The service is still free, but Tango will introduce premium paid features at some point in the future.

What is incredible about Tango’s growth is that it doesn’t even offer any desktop or Web software yet. Although, this seems like an obvious direction for new products, going mobile first certainly hasn’t hurt the company.