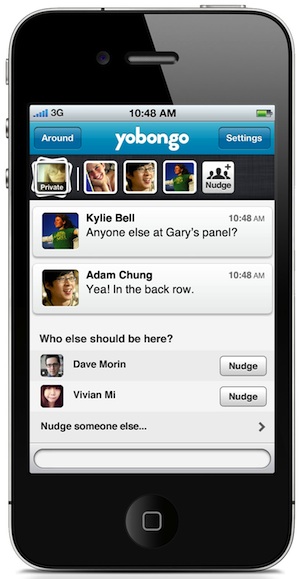 Yobongo has a problem that isn’t an easy one to solve. They want to create a realtime communication tool centered around location. But if people around you aren’t always on Yobongo, what do you do? Two new features aim to address that key issue. “Around” and “Nudge”.

Both new features launch today in the latest version of the app. And they make a lot of sense from an interaction perspective. “Around” allows you to see who has been recently active on Yobongo near you. This means that even if a user has closed the app, they’ll show up as someone who has been online recently and looking for a conversation. And you can message them. “Nudge” is more straight forward. You know the Facebook “poke”? Yeah, this is that for Yobongo. If you want to bring someone online to talk with them, you use this.

“As we work to reduce the friction of making new connections, we realized we were missing the real world equivalent of seeing who is around you,” Yobongo Caleb Elston says about Around. “We already allowed you to chat in a group with people, and then move to one on one conversations. Around fills the gap of seeing who is around, but with even more context than the real world,” he continues, noting that the recent Pondering feature plays a role here as well.

Meanwhile, of Nudge, he says that it’s “a quick way to get your Yobongo friends to join the conversation.” “If you swipe to the end of the faces in the top bar there is a new ‘Nudge’ button. When tapped, it presents a view of people who have recently sent messages and people you have interacted with on Yobongo whom you can then simply Nudge,” he continues, noting that if a conversation in the main chat room slows, they’ll also suggest users who you can nudge to join in.

Since its launch four months ago, Elston says that Yobongo is now seeing users sign in an average of three times throughout the day (which is lower than it would be if Yobongo didn’t add multitasking support recently) and that active users are sending sending 49 messages a day on average.

The startup remains committed to the iPhone as they don’t want to spread themselves too thin. They now have five employees.

You can find Yobongo in the App Store here. 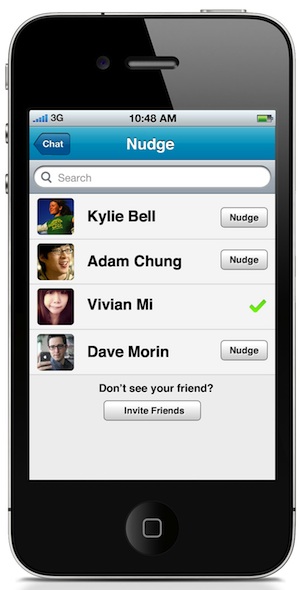