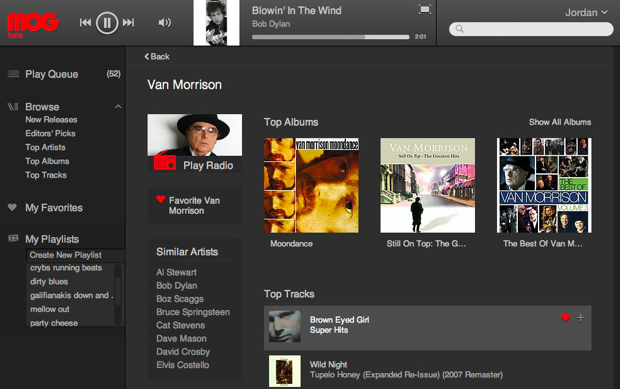 The online music race is now an all-out sprint: Amazon, Google, and Apple are now all offering (or preparing to launch) services that let you upload your music collection to the cloud, letting you listen to the music you own wherever you are. But they aren’t just competing with each other — another group of services that includes MOG, Rdio, and (eventually) Spotify lets users stream any song as often as they’d like for a reasonable monthly rate of around $10 a month.

It’s getting fun. And today, MOG is making the race all that much closer.

The service has just rolled out a new Beta player to users that streamlines the MOG experience, putting a much heavier emphasis on building out playlists and recommendations than its predecessor did.

Up until now, MOG users have been using a Flash-based player that appeared in a popup — you navigate the site in your main browser pane, adding songs as you go, and those songs are added to your playlist, which you control in the smaller popup window. It works fine, but compared to services that have adopted a more iTunes-like interface, it can be a little confusing.

The new player fixes that. It’ll look familiar to anyone who has used the MOG web app on the Chrome Web Store, which launched in December (it’s a variation on that player). But it includes some key additions, and it’s also rolling out as a beta option to all MOG users (previously the only way to access it was through the Chrome store, which many people don’t know about).

The new player actually has fewer features than the old one — it’s missing ratings and the ability to see the profiles of other users, for example. But, aside from a more intuitive and faster HTML5 interface, it adds features that are probably even more important: namely, recommendations and better playlist creation.

Now when you log into the new version of MOG, the service will look at your Facebook Likes (and the Likes of your friends) to start recommending artists immediately. I logged in with a test account populated with some of my favorite bands, and sure enough, the service immediately presented me with albums by The Darkness and Stevie Ray Vaughan.

MOG CEO David Hyman says that the team actually had some help from Facebook when it came to integrating this functionality. Hyman wouldn’t say anything about the rumored Facebook Music initiative that’s in the works, other than to say that he “hopes to do more great stuff with them in the future”.

MOG and other all-you-can-eat music services are increasingly competing on features like speed, recommendations and social sharing than they are on the size of their libraries. MOG already offers solid mobile applications, and this update makes the desktop experience significantly more compelling, especially for new users who are now met with a personalized homepage rather than a generic list of popular music. 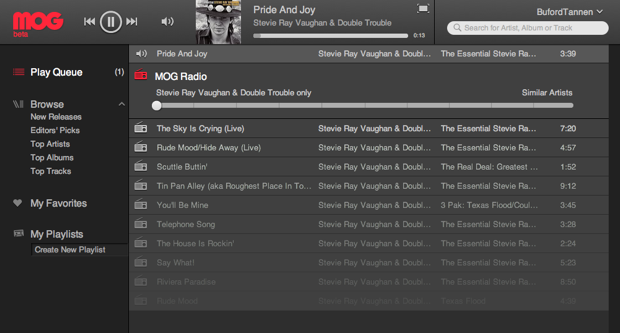 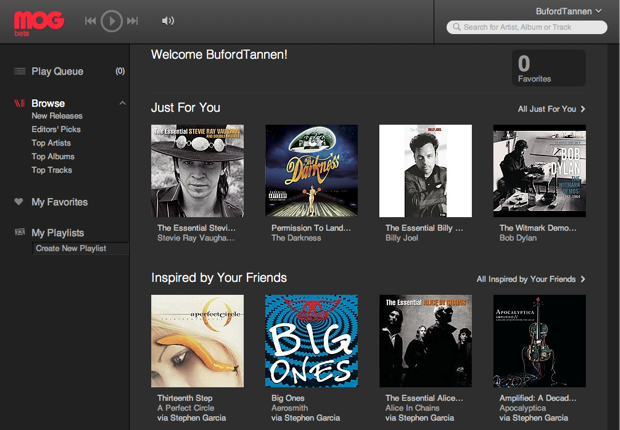