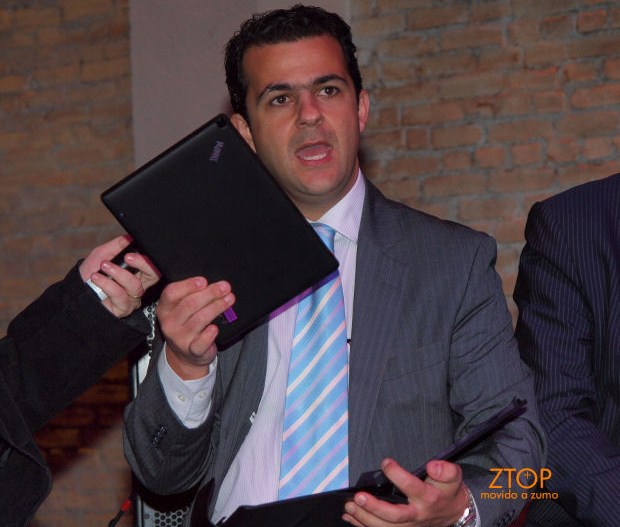 We’ve heard many things about Lenovo’s tablet plans, but they’re a bit hard to parse. After all, Lenovo is among the tablet faithful, and their convertible Windows machines have been selling steadily for years. We’ve heard they’ll be bringing a new Android tablet (the Ideapad) to the US, but whether it’s just a revamped LePad, a resurrected U1-type device, or something more interesting, we can’t exactly be sure.

It’s got to be coming soon, though, as Lenovo’s Jaison Patrocinio had one in hand at a recent event in Brazil. Like so many coy directors of product, though, he kept it under wraps except for one quick peek.

Any new info? Not really. We know it’s going to ship with Honeycomb and support pen input, and the hardware doesn’t seem to have changed. The translated article reads “the first tablet with capacitive screen stylus,” but earlier specs mentioned a digitizer, so I’m guessing it’s the latter; it wouldn’t be the first (that would be the Flyer) but it might do it better. I see a camera on the back, too… I think.

The tablet will initially be enterprise-oriented; as for the consumer version, Patrocinio said it was coming, but would only ship “when he is chubby. The only data they gave is that they would like him to be in stores until the time of birth.” Thanks, Google! I think it’s idiomatic Portuguese, meaning it’ll ship when it’s ready and they don’t want to put it out prematurely.