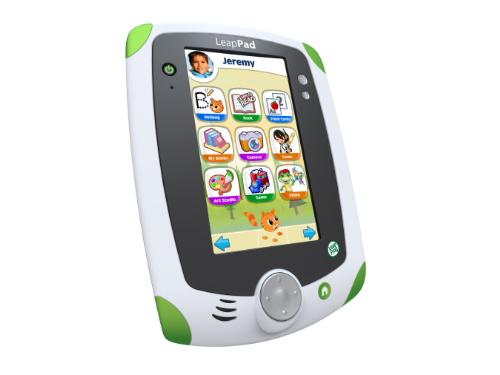 If you have a kid, LeapFrog requires no introduction, but since lots of us haven’t spawned quite yet, I’ll go ahead and say that LeapFrog makes educational toys, books, and games for children. And now with the announcement of its LeapPad tablet, the company has entered itself into the tablet arena, albeit with a kid-friendly spin. That’s right, all of you tablet-owning parents will soon have something to hand over to the kids when they try to put their dirty mitts all over your precious iPad.

As far as specs are concerned, the LeapPad has 2GB of memory under its 5-inch 480×272 touchscreen. It comes with a camera, video recorder, microphone and stylus, and has a motion sensor for certain games and learning activities.

Parents who already have LeapFrogs Leapster Explorer game cartridges and apps will be happy to know that everything is cross compatible with the LeapPad. By the end of the year, more than 100 new learning game cartridges, books, apps and videos will be made available for the LeapPad, too.

What’s cool about this tablet is that it is intuitive enough to know when the user is being challenged. For example, within every book on the LeapPad, there are three different versions of the text. If little Bobby or Susie is flying through the basic version of a story with relative ease, LeapPad can auto-adjust to a harder reading level while staying true to the original story. The same is true of the various games and educational apps available for the device.

Younger kids will be able to get a foundation in phonics, math, and spelling through the various LeapPad activities, and eventually move on to geography, world languages, music, science, and even life skills like brushing teeth. Since it comes with a stylus, children can even get help with their writing skills.

Pre-loaded apps include art, story, animation and photo studios. Within each, kids can create their own stories or artwork, and even learn to animate familiar characters like Cinderella. When they’re finished with their own original work, proud parents can share their kids’ stories or pictures with relatives and friends through email or Facebook.

The LeapPad will be available in both pink and green with a price tag of $99.99. It won’t hit shelves until August 15, but if you or your kid are super antsy, pre-sale begins in the U.S. and Canada tomorrow, July 29.