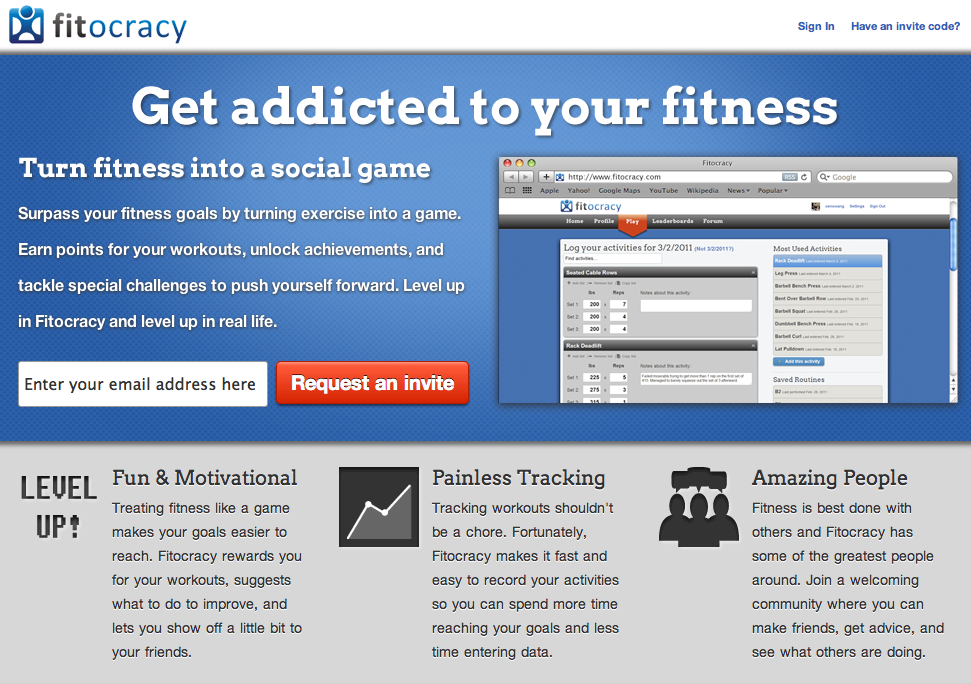 You may not have heard of them quite yet, but a startup called Fitocracy is pretty hot right now. Six months into its private beta and Fitocracy has already gathered 18K users and has 8K more on the wait list. (And we have 1,200 free beta invites here, so click away!) But, ‘why is Fitocracy so hot right now?’ you ask in your best Zoolander impression.

Well, for starters, Fitocracy brings role playing game mechanics and a social aspect to online fitness — and it’s got a great name. What’s more, Fitocracy blew up on Reddit and a few fitness forums because it has a backstory that a lot of people (especially the nerdly-inclined) can identify with. Fitocracy Founders Brian Wang and Richard Talens are college friends and are both currently fitness buffs and have been known to even compete in a body-building competition or two.

But it wasn’t always that way. Wang is a self-described skinny kid and Talens a self-described chubby guy. Their not-exactly ballooning in muscles (and the inspiration for their startup) is largely due to the fact that both guys are long-time gamers, having been playing MMO and RPGs since Ultima Online and Chrono Trigger. Of course, today, they look like this. (Oh, and here’s a before-and-after picture of Richard, FTW.)

So, the founders decided to approach fitness exactly as they did their favorite RPGs: Give people a reason to get excited about, or addicted to, fitness by bringing the gaming reward system to workout routines. For example, when you join, it won’t be long before other users are offering you Fitocracy’s version of a workout plan, called “quests”, in which you are encouraged to do a certain number of squats, lifts, crunches, etc.

The platform awards you with points, the ability to level-up, badges and more to get you dedicated to your fitness and treating it like a game, rather than some arduous task you’d rather put off until never. Of course, you’re going to be a lot less likely to adopt (and stick to) a workout routine without a little encouragement. Points are nice, but we need that carrot — that positive reinforcement to keep going. Which is why Wang and Talens have added a social aspect to Fitocracy — to build an environment of support and social reinforcement to keep people trucking on their personal fitness quests. You can interact with friends, share regimens, points-earned on social networks, get advice from others in various forums, and so on.

Another reason why fitness has such a high drop out rate is that, for any number of reasons, many people fail to see quick results from their workouts. (See any exercising infomercial on television if you think this isn’t a problem.) A lot of times, we’re too lazy to seek out advice or research the right routines. Adding game elements, social layers, and significantly shortening the feedback loop all work towards increasing retention and keep you coming back.

I had one Fitocracy user tell me that, in just three months of using the site, he had already dropped a waist size and added significant muscle mass. With a platform targeted at tech-savvy people, and for those of us who may live largely sedentary or laptop-centric lives, this is music to our ears.

Of course, Fitocracy does face some competition from another hot startup — Boston-based RunKeeper, which is building a platform that allows users to integrate all of their various health gadgets and apps in one place online. While RunKeeper has built a data-driven service with an open API (as part of what they call their “HealthGraph”) and is mobile on iOS, Fitocracy is more focused on gaming and, of course, less on running.

In light of its competition, Fitocracy could definitely use some more information on nutrition and some mobility — it would be great to be able to tap into Fitocracy when at the gym or on-the go. Though, as I understand it, both of these are at the top of the team’s priority list.

Fitocracy is currently looking to raise a seed round, somewhere in the ballpark of $500K I’m told, and is courting fitness-loving investors. It’s a cool site, and a great idea. It’s about time someone created a RPG for fitness, so that nerds can get back to doing what they do best: Kicking ass. And also earning XPs.