IBM’s Smarter Planet division released a new solution recently that can make buildings energy efficient— even if they are huge and 100 years old like the company itself. Vice president of the Smarter Buildings division at IBM, Dave Bartlett, visited TechCrunch TV to talk about the stupid ways that people waste energy in medium to large buildings, and how the company’s new Intelligent Building Management solution can change that.

According to an IBM press statement:

“Buildings consume 42 percent of all energy worldwide; energy costs represent about 30 percent of a building’s total operating cost— up to 50 percent of energy and water are often wasted. By 2025, buildings will be the number one consumer of energy in the world. IDC Energy Insights estimates that the global Smart Building market was $3.1 billion for 2010 and is expected to grow to $10.2 billion by 2015.”

To address this rampant power consumption, IBM’s new “Intelligent Building Management” solution does something with all the data from smart devices that have proliferated through the years. Sensor makers like Honeywell, Siemens, Eaton and Johnson Controls have made everything from refrigerators and water heaters, to computer labs and gymnasiums “smart,” Bartlett pointed out, so now it’s time to give people using them an easy way to read and act on the data they transmit.

Known as “the buildings whisperer” in retrofit and construction circles, Bartlett further explained:

“We’ve packaged up some recommended rule sets and technology [that can] essentially read a building, and say ‘if this is happening, do that.’ Customers can add their own rules, but we are taking what we’ve learned from working with partners and at our own campus [in Rochester] to be able to share general best practices, and make them easy to follow.”

One problem that IBM’s new solution diagnoses and eliminates in buildings is called “concurrent heating and cooling.” That’s where occupants have the heat on in one part of the building, but the air conditioning on somewhere else. It’s more common than you’d think, Bartlett reported, and it’s generally a big un-necessary waste of power. 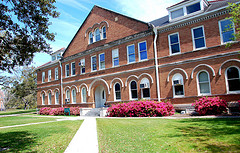 IBM’s solution is being used to control energy consumption and costs at the Cloisters museum in New York City, at Boston University, and Tulane’s campus in New Orleans (image, right). The company is reaching out to everyone from neighborhood residents, to building owners and local power providers to figure out where the most energy goes in such buildings, where it can be safely reduced, and which systems maintenance tasks can be automated, leaving building owners and operators to focus their time and money on more critical repairs and upgrades.

Previously, IBM used its own industrial and commercial buildings as a test lab of sorts. According to the company’s new, sustainability reports, the Intelligent Building Management solution saved IBM’s Rochester campus— which consists of three million square feet inside of 35 interconnected buildings— 8 percent on energy used, year over year.

IBM’s move into smarter buildings technology could prove a challenge for growing startups like EcoFactor, Retroficiency and Hara. Then again, IBM could become one of the top buyers of their services, or possibly an acquirer of these type of tech ventures.

Watch the video for more insights about energy waste and IBM’s approach to stopping it, above.