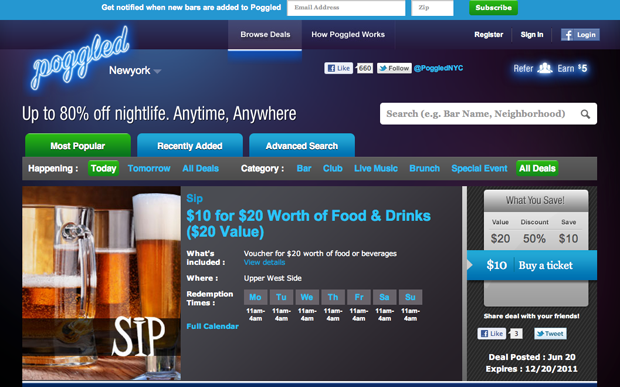 Poggled, the daily deals service that boasts Groupon investors Eric Lefkosky, Brad Keywell and NEA as backers, is expanding to other cities today, first on the list being New York and Denver.

Poggled is an interesting take on the daily deals model, with 50-70% off “evergreen” services at nightclubs, bars and music venues available every day without daily expiration. Users can search for deals on its iPhone and Android apps by filtering by Nearby, Happening Now or by Day of The Week, Event Type or Neighborhood. Users can also share their deal (and likely alcohol) consumption habits on Facebook and Twitter.

In addition to the standard “$125 for bottle service package”, there will be a limited amount of inaugural $1 deals available at New York venues like Sip and Nurse Bettie and Denver venues like The Walnut Room and Quixotes’ True Blue Cafe, in celebration of today’s launch.

The startup’s strategy is to launch in one large and mid-sized market at a time, and aims for launching in LA and SF at around the end of summer. Says CEO Joe Matthews on the expansion; “We are psyched to bring our party to New York and Denver.”