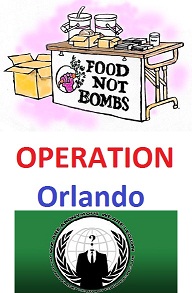 The hacktivist group Anonymous may be setting its sights on the city of Orlando, Florida next, if an anonymous press release which has landed in our inbox is to be believed (see below). The group is threatening to take down a different city-related website every day, starting with Orlando Florida Guide, which doesn’t even appear to be owned by the city of Orlando (it is registered to an organization called Utopia, administered by a man named Steven Ridenour). So any random website extolling the virtues of Orlando could be targeted.

The DDOS attacks are justified in the press release as retaliation for the repeated arrests of members of a non-profit group called Food Not Bombs, which feeds homeless people in a park without a permit. The leader of the group, Keith McHenry, was also recently arrested.

“This is a declaration of war,” writes Anonymous in its press release describing “Operation Orlando.” It warns the entire city that “Anonymous will now begin a massive campaign against you and your city web assets. Everyday we will launch a new DDoS attack on a different Target.” Its first target will be Orlando Florida Guide, which it threatens to take down between 10 AM and 6 PM tomorrow. No reason is given as to what the site or its owner did to incur the wrath of Anonymous, other than its local boosterism. It’s not even the City of Orlando‘s official website.

Update 6/28 11:15 AM ET: As of this time, the Orlando Florida Guide site is still up. Maybe Anonymous is sleeping late.

Update 6PM: As far as I could tell, the Orlando Florida Guide site was up most of the day, if a little slow to load, which kind of makes you winder if this really was Anonymous or some other group hijacking their name.

The City of Orlando has ignored our warnings, and our generous offer of a cease fire. On Wednesday last you not only arrested two more people for feeding but you arrested the worldwide President of Food Not Bombs Keith Mchenry. This is a declaration of war.

Henceforth there will be no more cease fires, no more attempts to get you to resolve this issue with human decency. We will now treat you like the human rights abusers that you are.

Anonymous will now begin a massive campaign against you and your city web assets. Everyday we will launch a new DDoS attack on a different Target. We will continue to E-Mail millions of people in 50 countries with the Boycott Orlando campiagn [sic] message.

In our experience a government that acts this way is also corrupt. We therefore call on any government or police employee who has evidence of any kind of wrongdoing to consider disclosing it to http://www.LocalLeaks.tk an organization that specializes in dealing with local disclosures.

We have said what we have to say. The media has many press releases and communiques from us. From now on we will DO not talk. Journalists should follow the Twitter for that days targeted take down or other un-planned assaults.

Tomorrow morning at exactly 10:00 AM ET Anonymous will remove from the world wide web www.orlandofloridaguide.com and it shall remain down until 6:00 PM ET. We will also E-Mail Bomb and Black Fax the owners of this site, identified as one Utopia, Inc.