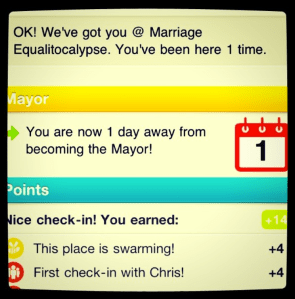 So I actually haven’t been following news at all today, and when I say news I mean actual news, not tech news which I keep up with like an addiction.  And I so had no idea that a bill to legalize gay marriage was passing through the New York State Senate at the very moment I was writing this post about the Quora redesign.

I was actually pretty surprised when TechCrunch Managing Editor Erick Schonfeld Skyped me with “Look at your Twitter feed.” In a quick game of Internet catch up, I scrolled through my feed.

So what heralded the news that the bill had passed 33-29? Well actually the above check-in to something called the Marriage Equalitocalypse.

While a lot of my stream is still filled with the noise of people making the requisite clever quips (see below), there are other, more poignant digital artifacts of the historic moment: the hashtag #equalityforall is trending, this pic of a rainbow colored Empire State Building has gone viral and (perhaps the best part) NYC Mayor Bloomberg also checked into the Marriage Equalitocalyspe, the very same Foursquare check-in that was my gateway to the milestone.

The Wikipedia entry for “Same Sex Marriage” was updated seemingly in a matter of minutes, of course.

There was something so isolating as a kid when my family turned on the TV to absorb world news on a Friday night, and the only reactions I could see to current events would be that of the people in the room, and those of the people on the screen.

I feel exactly the opposite of isolated when I’m sitting in the office finishing up work for the weekend, and one quick glance at Twitter allows me a glimpse into the opinions of my co-workers across town, or how people are celebrating the approval at the Stonewall Inn in NYC. I can even tap into the sentiment of strangers half way across the world if I so please.

The future, to borrow an apropos phrase, it got better. 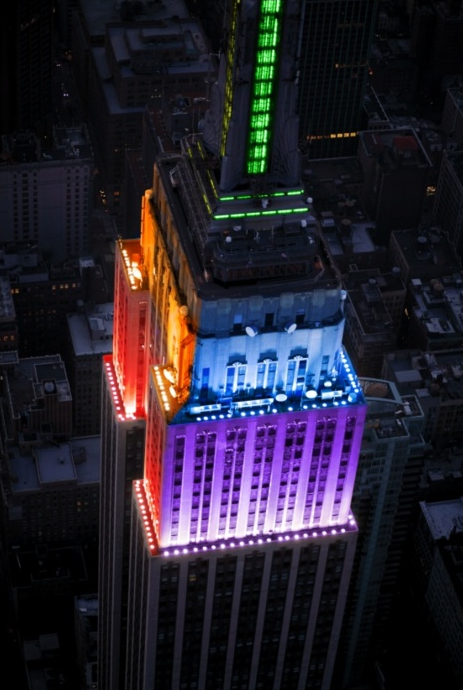