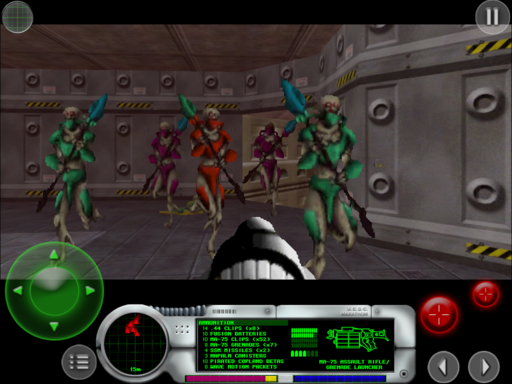 Marathon was the Mac answer to Doom, and when I was younger I preferred it infinitely (in my innocence), lauding its creative level design, intense multiplayer, and insanely well thought-out story. When it gave way to Halo I pretty much stopped caring about Bungie, but now they’ve gotten my attention again.

As part of Bungie’s big 20th anniversary celebrations, they’ve finally released the complete Marathon to the development community, which actually isn’t that big of a deal, since they’ve had most of it for some time now. But as of today the whole series is officially free and open source.

What’s more, a “fan developer,” Daniel Blezek, is nearing completion of his port of Marathon to iOS. I’m not sure whether the on-screen controls are going to do it for me, but luckily, Marathon (like Doom) was simpler to control than games these days and doesn’t rely so much on the Z axis.

Now where’s my Pathways Into Darkness?!