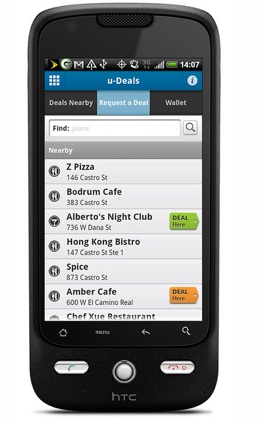 Loopt has gone through quite a few incarnations, and this morning that tradition continued as the mobile social network announced it was entering the daily deals space with a service called U-Deals. In essence, U-Deals lets users request their own deals. After submitting an idea for a deal, users can then drum up interest by way of social media channels like Facebook, Twitter, etc. If the deal receives enough support, Loopt will contact the business and request that they help turn the deal dream into a deal reality.

Of course, as my colleague Erick Schonfeld pointed out, for this to work, Loopt needs to get enough deals requested and turned on for this to become a viable model for Loopt . Not to mention there’s some friction when considering that not many people have heard about Loopt, let alone think of it as a daily deals provider. And then there’s the issue of building a sizable salesforce.

There was some skepticism in the comment section at the end of Erick’s post over Loopt’s new direction, and some made the good point that user-generated deals have been tried before, without a lot of success — not to mention that it remains to be seen whether or not users will be willing to wait for deals to be approved. We do love our instant gratification. There’s certainly something to be said for the growing interest in the combination of location-based-services and daily deals, even if the LBS space is brimming.

Today, mere hours after announcing U-Deals, Loopt took the first step towards silencing its critics (though admittedly it still has a long way to go before that silence is permanent), as its first U-Deal sold out in under an hour. 48 minutes, to be precise. The first U-Deal, made in partnership with Virgin America, offered $35 for a Virgin America ticket voucher valued at $100. 500 deals were offered, and 500 deals sold in 48 minutes. Not too shabby.

Discounts on airfare are definitely in demand with the high price of tickets today, so this was no doubt a great place to start. Especially with Virgin America. But it will be interesting to see if U-Deals can sustain relevant deals of this kind when the names aren’t quite as big. If so, there could be great things ahead for Loopt’s new service. We’ll have to wait and see.

But for now, it’s probably fair for Loopt to say, “How do you like ‘dem apples?”