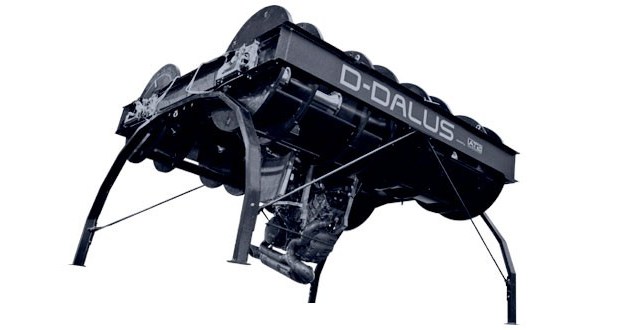 It’s not often that you see technologies that can legitimately be described as revolutionary, though seemingly every press release describes every gadget as such. But this D-Dalus flying vehicle, presented at the Paris Air Show, appears to be an actually revolutionary technology within aviation, as it uses a completely unique form of propulsion. So unique, in fact, that I’m having trouble picturing exactly what it is.

Here’s what the D-Dalus site has to say about it:

The propulsion consists of 4 sets of contra-rotating disks, each set driven at the same rpm by a conventional aero-engine. The disks are surrounded by blades whose angle of attack can be altered by off-setting the axis of the rotating disks. As each blade can be given a different angle of attack, the resulting main thrust can be in any required direction in 360° around any axis. This allows the craft to launch vertically, remain in a fixed position in the air, travel in any direction, rotate in any direction, and thrust upwards thereby ‘gluing down’ on landing.

So, engineering aside (because I can’t comprehend it, and much of it is patented and shrouded in mystery), the ability this thing has is to essentially push its thrust in any direction, and from four discrete places as well. So not only can it take off vertically or hold itself down by sending thrust upwards, but it can float effortlessly in even choppy air. Surveillance platform, anyone? 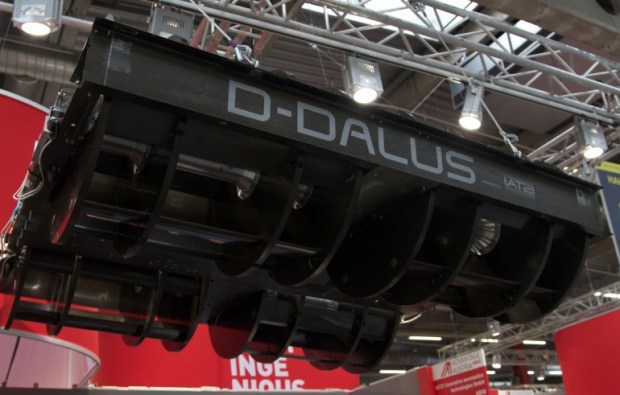 Right now the prototype is about five feet long, runs on a 120bhp engine, and has a load limit of about 70kg. They’re looking at how to expand that, but I wonder if that is perhaps the limiting factor on this platform? Unlike an airplane, which can take a comparatively large load because of the aerodynamic principles involved, it seems like the D-Dalus must grow significantly in size and weight in order to push more air.

Hopefully they’ll release a video soon and what makes this thing go will become more clear.