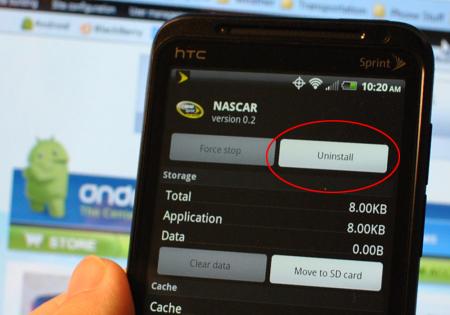 If Sprint were a physical being that I could high-five, I’d totally be giving them the Bro-iest high-five the world has ever seen right now.

Pretty much all of the carriers pre-install a bunch of crap onto their Android devices before they stick’em on the shelves. That’s not big deal, really; most of them make money from the apps (be it through subscriptions or partnerships), which makes Android more advantageous for them, which works out to more Android handsets — and that’s always a good thing.

The problem? On pretty much every single handset we’ve seen, these pre-installed applications.. can’t be removed. Not without spending a few hours learning to root (read: hack) your device, at least.

Based on a few reports coming from AndroidCentral’s forums, it appears that Sprint’s new EVO 3D makes no attempt to keep the user from deleting these apps. One just has to pop into settings, drop into their application list, and delete the apps as they would any other. The only thing that can’t be deleted is Sprint’s “ID” service — but that one is pretty deeply integrated into the OS, so we’ll cut them some slack. Lets hope this isn’t a mistake… and more importantly, that it starts a trend.