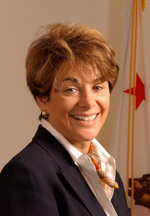 All 4G is not created equal.

You see, each carrier seems to be defining 4G as they see fit. Verizon’s got their new LTE network. Sprint’s got WiMax. AT&T and T-Mobile have upgraded their 3G networks to a faster (but still technically 3G) technology called HSPA+. Each carrier’s network has widely varied speed capabilities, and are at different points in their nationwide coverage rollout — and yet, all of them are wrapped up in the little marketing buzzword-burrito that is “4G”. Confused yet? Making things worse, none of these networks are actually 4G — at least, not as 4G was defined by the International Communication Union last year.

Looking to clear up this mess a bit, Democratic Rep. of California Anna Eshoo has proposed a bill requiring carriers to clarify whatever the hell it is they mean when they say “4G” by providing speed details, coverage maps, pricing, and layman explanations of the technology in place. Taking it one step further, the bill would also require carriers to provide consumers with side-by-side comparisons of their “4G” tech versus that of the other players.