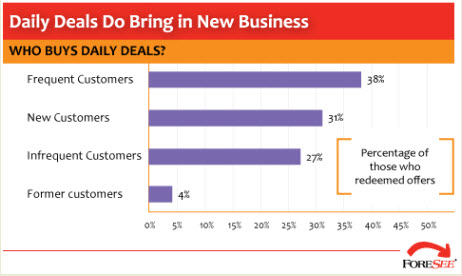 Research firm ForeSee Results put its analysis spotlight on the daily deal industry, concluding that discount distribution services offered by companies such as Groupon, LivingSocial and Google do in fact bring lots of new customers to merchants’ doorsteps.

According to ForeSee, 38 percent of the people purchasing daily deals were already frequent customers of the merchant in question (which could be bad news for retailers since they give discounts to people who already buy its products and services at full price that way).

However, 31 percent are brand new business, and 4 percent were former customers, which translates to 35 percent new business. Furthermore, since the remaining 27 percent are described as ‘infrequent customers’, you could even argue that, in total, 62 percent of daily deal buyers are the people merchants are most keen to reach.

It’s that 62 percent, you see, that businesses offering discounts on sites like Groupon and LivingSocial, should be trying to convert to regular customers by giving them a good experience and a taste for more (preferably at non-discounted prices).

By the way, we recently ran a guest post written by a BBQ restaurant owner who was very excited about his experience with Groupon – he said that 70 percent of the 1,200 customers the deal had brought to his doorsteps were actually new customers.

(We also ran a series of candid guest posts by a self-described daily deal hater, of course).

The data cited above comes from ForeSee’s Top 100 Online Retail Satisfaction Index (Spring 2011). This is annual research conducted by ForeSee with regards to customer satisfaction with the to 100 American e-retailers, and comprises data from surveys of some 22,000 online shoppers about a variety of topics.

According to ForeSee, about two thirds of those ‘Top 100’ site visitors are enrolled in at least one daily deal email program (or 65 percent of the 22,000 respondents).

Of those who subscribe to daily deals, ForeSee posits that nearly half (46 percent) subscribe to more than one service, leading the firm to the conclusion that there may be enough room for a host of competitors in this particular space.

Still according to ForeSee’s data, nearly two-thirds of subscribers to daily deals have purchased at least one deal in the past 90 days, regardless of what site they’re subscribed to, and 89 percent have redeemed their purchase during that time.

More stats and charts are available over at the ForeSee Results blog.

Why Daily Deals Are Becoming A Raw Deal

Why Groupon Is Poised For Collapse 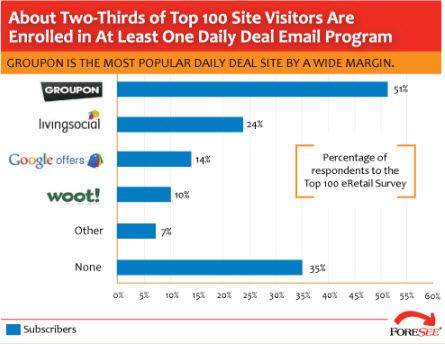