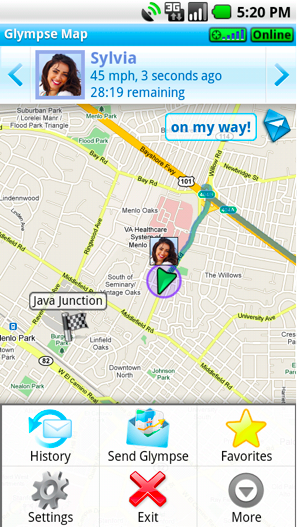 Between Foursquare, myriad deals apps, Google’s Latitude, and all the rest, you’ve got plenty of ways to tell your friends (or anyone following you on Twitter) where you’re going. Of course, oftentimes you don’t really want to tell all of your friends where you are, and even then you may only want them to be able to see your whereabouts for a short while. That’s where Glympse comes in.

The service, which is based entirely around ‘sharing your where’ with select friends a few hours at a time, has just raised a $7.5 million Series B funding round led by Menlo Ventures and Ignition Partners.

So far, the service offers applications for iPhone and Android that let you create ‘Glympses’, which include a map of your location in real-time. You then share these Glympses with friends via SMS, email, Facebook, or Twitter — clicking on the link will take them to a webpage that shows a map with your location updating in real-time (the Facebook widget actually updates directly in the News Feed). You get to set how long you want each Glympse to last — it can be as long as four hours, though the average Glympse is around forty minutes. Once it expires, they can no longer see your location.

Say, for example, you were running late for a meeting and wanted your coworkers to have a sense for when you’d be arriving at the office. Instead of having to send a series of text messages (“15 minutes..”, “traffic bad, make that 30 min”, and so on), you could just send a Glympse that let them track your progress on a map. Then, when you arrived, you could turn the Glympse off and the map would stop updating.

We should note that Google’s Latitude actually has some of these features, as far as being able to limit how long you’re sharing your location. But Glympse’s core focus revolves around these temporal shares, whereas Latitude has a lot of other things going on.

So where is Glympse going next? The company isn’t sharing much about its future plans, other than to say that they’re working with partners to integrate the product into “the everyday life experience”. In other words, expect them to move well beyond their own iPhone and Android apps in the near future.