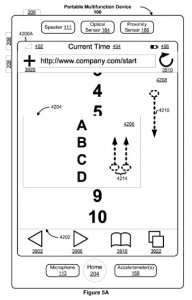 Apple has just been awarded a very important patent that describes changes to the iOS user interface. The patent was originally filed back in December of 2007 as a part of a string of provisional patent applications that go back as early as January 2007. While this patent isn’t necessarily as significant as the 358-page “iPhone Patent” granted in 2009, but it still has major implications for other smartphone makers.

Basically, the patent describes a way of navigating around the screen, while simultaneously panning through an embedded frame on the screen using multitouch actions. In other words, you can scroll around a web page with a single finger, while using a two-finger touch to scroll through a specific, embedded frame.

Patent experts who spoke to PC Magazine weighed in on the potential affects this patent may have on Apple’s competitors. They suggest that the content covered in the patent is broad enough to limit its competitors in what they can implement to their capacitive multitouch UIs.

Here’s the important bits of what the experts had to say:

Apple’s patent essentially gives it ownership of the capacitive multitouch interface the company pioneered with its iPhone, said one source who has been involved in intellectual property litigation on similar matters. Apple’s patent is also written broadly enough to apply to non-smartphone devices such as tablets and iPod touch-like media players, giving Apple significant clout in protecting its technology.