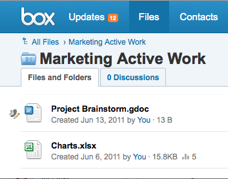 Cloud storage and collaboration startup Box.net is upping the ante against competitor Microsoft SharePoint today with the launch of an in-depth integration with Google’s productivity suite Google Docs and Spreadsheets directly within the platform. Essentially, the integration allows for users to create, update and collaborate on Google docs within the Box platforms.

Box, which has 6 million users and stores 300 million documents, is a cloud storage platform for the enterprise that comes with collaboration, social and mobile functionality. Box has evolved into more than just a fils storage platform, and has become a full-fledged collaborative application where businesses can actually communicate about document updates, sync files remotely, and even add features from Salesforce, Google Apps, NetSuite, Yammer and others.

Considering that most businesses that use Box are storing documents and spreadsheets on the cloud, the ability to actually create and edit these documents from within Box makes a lot of sense. And CEO and co-founder Aaron Levie says that most of the businesses using Box are Google Apps users. See our TechCrunch TV interview with Levie discussing the news below.

With the integration, all Box users can can apply Google’s real-time, concurrent editing to the more than 50 million Word and Excel files already stored on Box, and also create Google Docs and Spreadsheets directly within Box folders. Users can then share these files with other Box users, view document updates in Box’s real-time activities feed, and leverage Box collaboration tools like commenting and tasks. Box is using Google Apps’ core API for the integration.

Box, which just raised $48 million in new funding, sees this functionality as an alternative to Microsoft’s cloud document platform, Microsoft Office 365, which will come out of beta next week. Clearly teaming up with Google is part of Box’s strategy to gain marketshare from Microsoft SharePoint

Levie tells us the integration makes sense considering that many Google Apps customers are already familiar and comfortable with the cloud. So there is a lot of crossover in user base. But I also wonder if this integration will be able to draw additional users (perhaps Microsoft customers).

Levie also doesn’t seem to be too worried about Apple’s foray into iCloud, telling us jokingly that ‘Jobs is jealous of our business model.’ He explains further ‘We think it’s going to be a very powerful application for iOS devices, but it will be a challenge to extend it beyond the Apple ecosystem.’ Levie says that Box offers functionality on the iPhone, Android, PC, Mac and iPad. 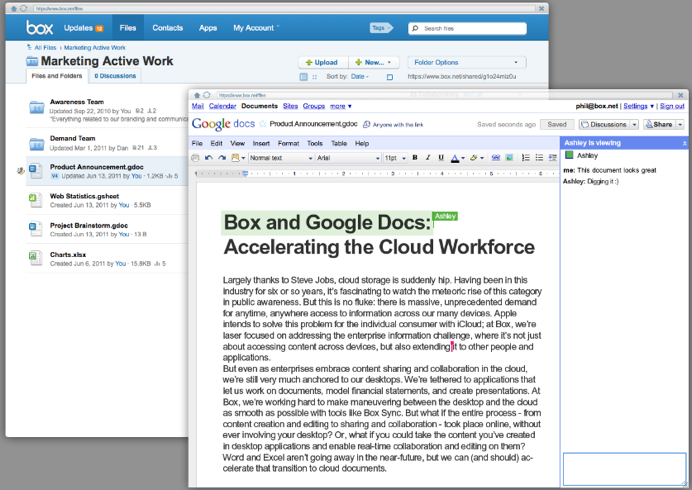