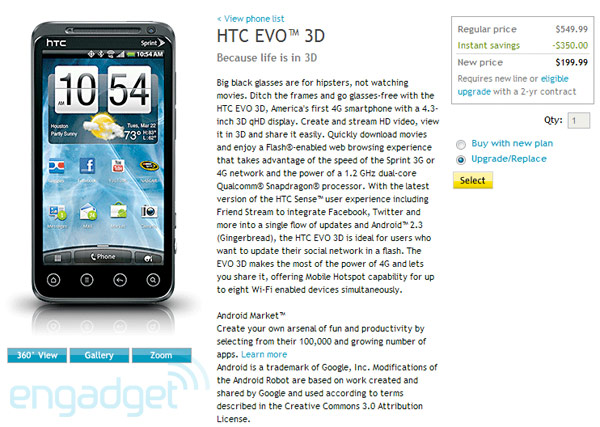 Sprint’s Premier club, the one for all the cool kids, is about to make a select few people very happy. The EVO 3D, which is one of the most sought after phones of the season, will see a nearly $250 price cut with the deal Sprint’s offering. Basically, if you’re a member of Sprint’s Premier club you can get this 3D-packing super phone for just $199.99. Of course, this deal will lock you into a two-year contract with Sprint.

Dotted line or not, $200 is quite the discount on a phone priced at $549.99, especially with the EVO 3D’s crazy amazing specs. I kid you not – just about every Android fan I know wants this phone, and now those in Sprint’s Premier club might actually be able to afford it.

For those on the fence, a quick specs refresher should do the trick: the HTC EVO 3D sports a 4.3-inch qHD display, a 1.2GHz dual-core processor under Android 2.3 Gingerbread, 4GB of internal memory, 8GB microSD card (expandable to 32GB), a dual 5-megapixel rear camera that shoots 3D stills, 720p 3D video, and offers 1080p HD video playback in 2D, and a 1.3-megapixel front-facing shooter for video chat.