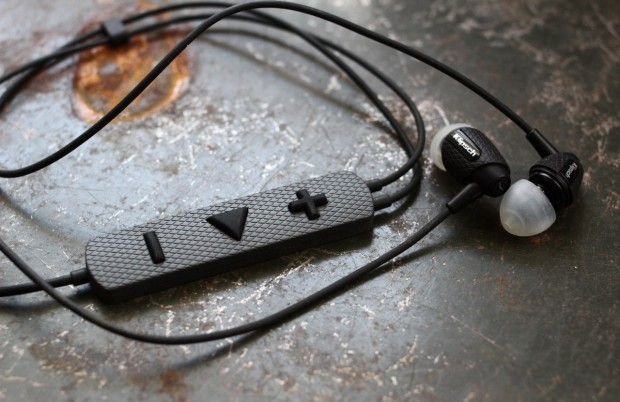 Short version: A solid pair of headphones with some token efforts towards ruggedness. Aside from an increased resistance to water, they’re not remarkably tough, but the sound is good and the remote is nice and chunky.

Klipsch’s in-ears have a long, illustrious history, so I won’t bother you with it. I’ve enjoyed their headphones before, but the S5i is their first rugged set to my knowledge, though with headphones and in-ears in particular, rugged is really more a style than a serious change in hardware.

These headphones will no more than any other survive complete submersion in water (or lava), but they are built with activity in mind, and they won’t be bothered by a little rain.

Sound is good. Klipsch knows what they’re doing. There’s plenty of power in them, if you’re wearing them correctly, and room for clarity if you want to push it, but the focus seems to be on the mid and low end. I pushed them pretty hard from my PC’s headphone output (which generally runs a little high) and got no clipping or distortion, though at high levels the highs were a little hissy. The bass and mids stay solid, and at that point they’re pretty good for isolating yourself on a train or street. Klipsch claims they’re noise-isolating, and they are, but that’s just a natural consequence of filling your ear canal. The S5is don’t do it any better than any other in-ears, as far as I can tell.

The cords are of a matte rubber of above the average thickness, which is reassuring strength-wise, and also really does prevent serious tangles, even uncoils itself. The disadvantage seems to be an increased amount of cord noise in the headphones, a problem that affects all in-ears, but these in particular.

The controls are really big. I know some people prefer these to be small or even on the headphones, but if you’re skiing or biking and don’t have the time or manual dexterity (wearing gloves, for instance) to feel for the orientation and correct tiny circular button, you’ll appreciate these jumbo buttons, shaped in +, -, and triangle shapes. They worked fine with my iPad, though of course they’re not compatible with anything other than iDevices (on Android phones it launches the speech search, for what it’s worth). It could really have used a clip, though, for attaching it to your shirt or jacket. It tends to swing about.

I’ve always enjoyed the fit of in-ears, but I can’t say I would trust them to stay in my ears during any kind of truly strenuous activity, especially if there’s a good amount of sweat involved. I know, it’s gross, but bear with me, since it’s a serious consideration for the likes of joggers and cyclists. If you’ve got sweat trickling down your head, there’s a good chance it could cause these things to slip out of your ears. Again, this is an issue with any silicone-tipped in-ear headphones, but since Klipsch is presenting these as an athletic option, it seems worthwhile to point out that there are no precautions taken against it. Some headphones I’ve reviewed have the option to run the cable around the back and over the top of your ear, which would have been welcome here — but the single orientation of the S5i headphones doesn’t permit it.

As for being waterproof, well, I wore them out in the rain several times and in the shower once to really push them. I never had any trouble with leakage, and as I was using a Motorola Defy to play music, I had no worries on my device’s part either. 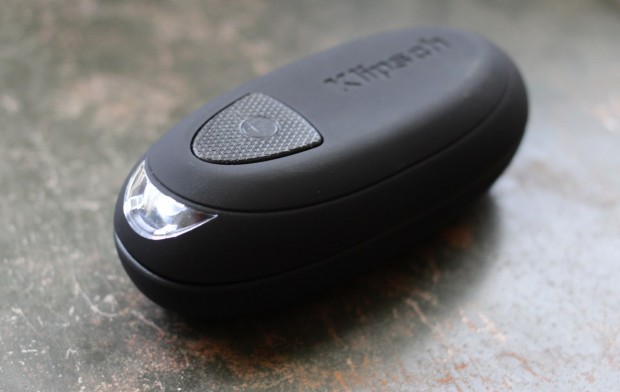 Bonus: The S5is come with a sweet hard case with plenty of room inside, and an actual LED flashlight on the outside. It’s not very strong, but it works and could be helpful on a camping trip or what have you.

While some things seem to have been done to make these headphones sporty, I’m not convinced just yet. The lack of a clip for the remote (which is itself nice) is troublesome to anyone doing anything active with these, and there’s nothing about the headphones’ fit that make them more likely to stay in than the next pair. At the same time, it’s the same solid Klipsch quality as the rest of their in-ear line. But are these mostly cosmetic changes worth the extra $30 from the S4i, the extra $50 from the S4? I can’t say they are, but if Klipsch made a few more changes to the hardware to make them activity-friendly, I’d have nothing to say against them.