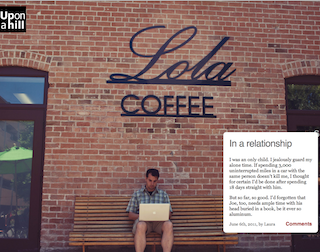 Back in early May, developer Joe Hewitt surprised a lot of people when he abruptly announced he was leaving Facebook after nearly four years. Hewitt had been vital to everything from the social network’s iPhone app (the most popular app of all time) to (supposedly) the don’t-call-it-a-phone secret phone project. But he apparently wanted to return closer to his pure web roots (he was an early developer of Firefox and built the still widely-used Firebug dev tool). And today we’re seeing the first fruits of that journey back.

Hewitt has just announced a new site, Up on a Hill, a photo blog he made in collaboration with his girlfriend, Laura Copeland. The site itself looks great, but the real key (at least from the tech perspective) is Hewitt’s use of Scrollability, the native scrolling framework he created for mobile web apps. “Most mobile websites still rely on clicking (actually, tapping) buttons to navigate through sections that should really be using inertial scrolling, like photo galleries. That’s unfortunate, because flicking through pages is a far more comfortable than tapping on small “next” and “previous” buttons,” Hewitt writes.

That’s funny. The first such a photo galleries that come to mind matching that description are on… Facebook.

As Hewitt notes, Up on a Hill was designed to work on desktops, phones, and iPads. And again, it looks great on all three. But Scrollability really shines on the iPad, where you can seamlessly flick up, down, left, or right to navigate the images.  ReadWriteWeb has more details about Scrollability from their initial look at the open source project last month.

“My hope is that Scrollability will encourage mobile web developers to be more like native app developers, and use inertial scrolling when it makes sense, rather than falling back on desktop conventions,” Hewitt ends his post tonight by saying. Remember, this is the guy who once ripped apart the state of web development as compared to native app development. Now he’s trying to do something about it. Bit by bit.