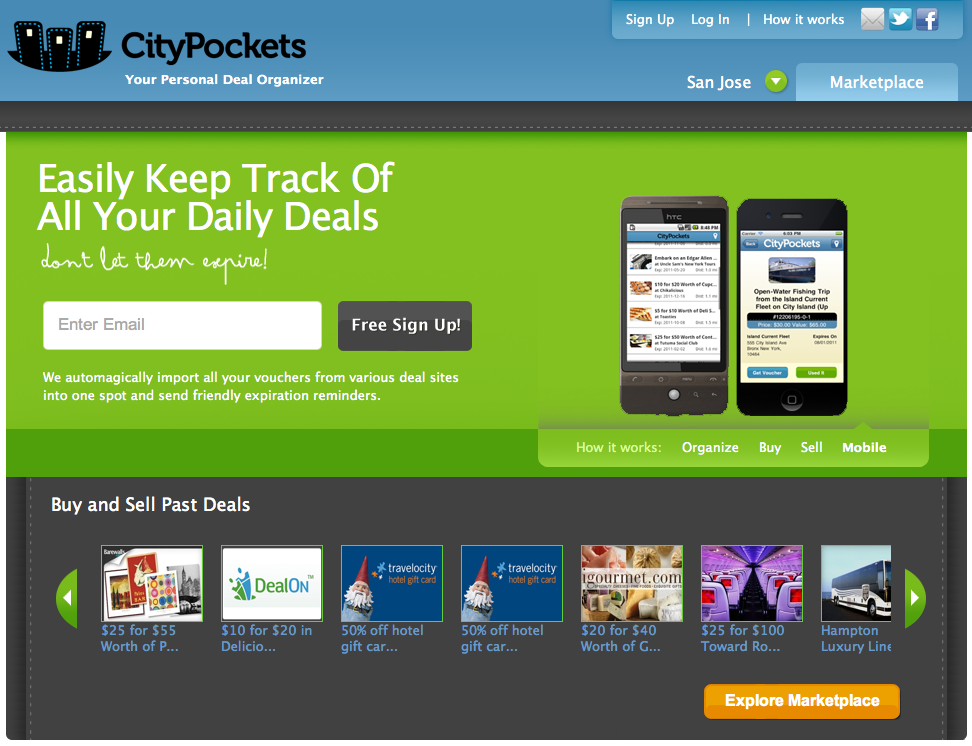 Like them or not, Groupon has successfully brought coupons to a whole new generation. Tellingly, this has resulted in a cavalcade of clones popping up in its wake — and they continue to pop up — like some kind of infectious popcorn. The effect of which is that bargain hunters, coupon clippers, local shoppers, and those just looking to save a few bucks — all these people, myself included — invest in a ridiculous amount of coupons or daily deals across an array of deal-hawking sites. And maybe it’s just me, but half the time I end up getting excited about a particular deal, but then within a few hours, I’ve forgotten about or lost track of them.

Enter stage left: CityPockets. This New York City-based startup aims to be the portfolio (read: wallet) for all one’s daily deals and digital discounts. CityPockets users range from those with a few vouchers to those horder-types that have deals coming out the wazoo — so you don’t have to feel left out if you’re not one of the latter.

Users can bring in their information from Blackboard Eats, Bloomspot, BuyWithMe, Daily Candy, EverSave, Gilt City, Groupon, KGBDeals, Livingsocial, Thrillist, Restaurant.com, Yelp Deals and more so that CityPockets can help you keep track of your many (or few) vouchers. The other important feature here? CityPockets allows users to set custom reminders so that they can be reminded when a voucher is about to expire.

The second key factor to CityPockets’ virtual deals wallet is that the startup has recently launched a secondary marketplace where users can unload deals they can’t use anymore to those looking for a similar deal. Since the voucher belongs to you, the user (or seller) can edit (or end) the sale of their voucher, and CityPockets won’t impose any restrictions on the sale price. Once you’ve sold a voucher, CityPockets will deposit the money into the PayPal account you’ve added, and you’ll receive an email confirming the transaction. Though, CityPockets does impose a small transaction fee on the sale — they have to make money, people.

CityPockets already had an easy-to-use and sharp UI, but today the startup launched a re-design, and now the site looks even better. The same features still exist, though now in version 2.0, including the service’s sexy coupon organizer that places all your deals in categories, with a bunch of different ways to view deals, by type, date, and so on. Users can also view their deal portfolio on an overlaid map, which you can use to pick the location of your upcoming night out on the town.

The startup is also announcing today that it has closed a $735K seed round, led by Great Oaks Venture Capital, which has invested in sites like StubHub, Cardpool, OkCupid, etc. Contributing investors also include MI Ventures, and several other NYC-based angels and international investors. The new seed round adds to the $20K CityPockets received as part of its participation in LaunchBox Digital’s accelerator program.

According to CityPockets CEO Cheryl Yeoh, the startup will use the influx of capital to ramp up hiring, especially for developers and engineers, and finish up work on its Android and iPhone apps, which are due out in the first week of July.

While CityPockets currently supports 30 deals sites, Yeoh said that she hopes to expand the startup’s reach to eventually include the some 450 deals sites currently operating in the U.S. And that near-term plans for expansion include adding a personalized “Recommended Deals” vertical, a la Amazon, that serves recommendations based on users’ purchase history, preferred category, price range, location, etc.

While the daily deals space becomes more and more saturated every day, with its secondary marketplace for deal resale, CityPockets finds an end-around the “breakage problem” that irks many local vendors — and the startup is clearly adding value and usability in a space that suffers from the opposite. The site is attractive, usable, and cuts through the fluff. I’m excited to see what the future holds for CityPockets; I’m going long on ’em.

For more, check out the video below: