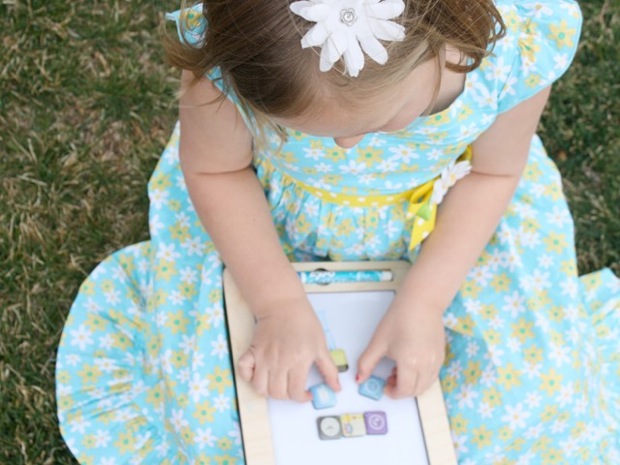 Kindness, sociability, affection, appreciation of others: those are the things your child could be learning if we didn’t just slap down an iPad in front of them every time life gets a little crowded and they get a little bored. But what about the smallest of the younglings? What can they do to have a good time while we amuse ourselves into the sweet release of e-toxicity? Why not pick up the anaPad, a fake iPad with little magnet apps and a little pen for junior to write “MOME PA TENTSHUN TO ME” on.

And, after all, don’t they learn these habits from watching us? Don’t they see us tapping away at Blackberries and iPhones and iPads in front of them and don’t they want in on the action? But there is something in the parent’s heart that says “No, don’t do this. Don’t give them Angry Birds. Give them something wholesome, something painted in lead-paint blues and reds, something that resembles something fun from our youth.” And a toy like this is seemingly a good trade-off: it’s not a real device but it’s still close enough that maybe the kid won’t care.

But he or she will care. They’ll see that the real device is off limits because Dad says so. And because Mom needs it for work. And because sis is texting her friends. And they’ll see that the only way to communicate with the family is through the keyboard and through the ether and through the Facebook. And slowly, slowly, they’ll sink into the electronic miasma of modern life, brains stuck in sludge as they churn through value-less status updates and vapid media. And then they’ll be just like us.