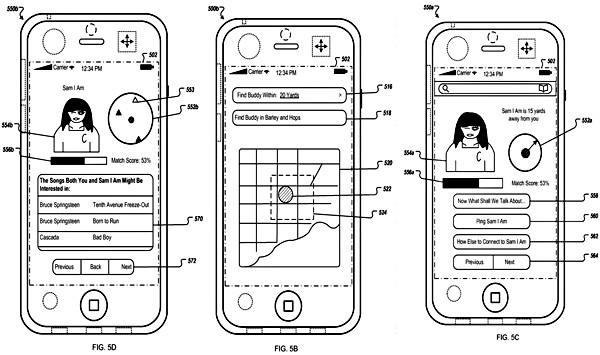 After Ping’s not-exactly-earth-shattering launch, Apple has remained relatively quiet on the social networking front. However, a freshly discovered patent application suggests the company isn’t quite ready to toss in its friend-making towel quite yet.

Filed towards the end of 2009, the patent application describes a location-based social network that lets users find people nearby that share common interests, including books, movies, and, of course, music.

The idea bears some resemblance to Color, the recently launched photo-sharing network which groups people according to venue. Like Color, Apple’s social network can connect you to others nearby, allowing you to partake in the Internet generation’s favorite pastime: sharing experiences with complete strangers without having to actually talk to anybody. This isn’t Apple’s first time to play around with the idea of a location-based social network; an “iGroups” patent application surfaced midway through last year, but nothing really ever came of it.