Zynga is launching its second mobile game in two weeks, and today is debuting its mobile version of its hit game CityVille, ‘CityVille Hometown.’ The game is debuting via a free iOS app in Canada in the coming week and will be globally rolled out in the next few weeks. And CityVille Hometown is first mobile game from Zynga that will be localized in French, Italian, German and Spanish.

While the strategy and mechanics of the game is similar to its Web cousin, CityVille Hometown focuses on building small towns and villages instead of building a booming metropolis.

Justin Cinicolo, General Manager of Mobility for Zynga, explained to us that instead of creating cities, players will look to create a bustling town, invite friends and in-game characters to be neighbors, and build out their communities.

Players will fist be greeted by characters Bert and his mother Gilda who welcome and show them the basics of building a community. Kate, the resident community manager, will help players navigate their new hometown so they can begin to build, decorate, and for the first time and choose and name the citizens who will help them complete quests. The more players interact with the characters in their town, the more they will learn about their stories and help them achieve their own goals.

And players can purchase virtual goods to help build their homes and neighborhoods, such as actual homes, businesses, decorations, and coins.

So where’s the social component? CityVille Hometown can also access their Facebook friends who play CityVille and can swap resources and energy and send and receive special limited edition virtual items as rewards. Yep, that’s it. Whereas the web version of CityVille was Zynga’s most “social game yet,” the mobile version doesn’t appear to be quite as social.

One of the reasons why Zynga deviated from the metropolis angle for CityVille Hometown is because of the form factor of the iPhone, iPad and iPod Touch. Cinicolo tells me that they wanted to make the space more meaningful for a smaller device and smaller screen, and the design of buildings didn’t fit as well as building a home.

He says that lessons learned in taking FarmVille mobile were a contributing factor in figuring out how to optimize a game title for a mobile device. He adds that there are no set plans to expand CityVille Hometown to Android phones.

As for what type of player the game will engage, Cinicolo says Zynga is aiming for CityVille hometown to appeal to a broad audience, both in terms of age and gender. He compares the characters in the game to the feel of Saturday morning cartoons.

Zynga continues to churn out hits when it comes to its Facebook games. FarmVille was a big hit, CityVille became even bigger and the gaming giant’s newest game Empires & Allies is projected to surpass the monthly usage of CityVille and FarmVille.

But in comparison to the pace of web games, the company has been slower to create hits on mobile devices, even though mobile has been a focus for the company for some time. But things could be changing. Hanging With Friends hit the no. 1 spot in the Apple App Store across 3 charts—Top Free, Top Paid and Top Grossing. FarmVille has also done fairly well on the App Store. And with the massive popularity of CityVille’s Facebook game, CityVille Hometown could be a win as well.

CityVille currently has 90.5 million monthly active users on Facebook, so it should be interesting to see if Zynga can create the same sort of powerful engagement with the mobile version. 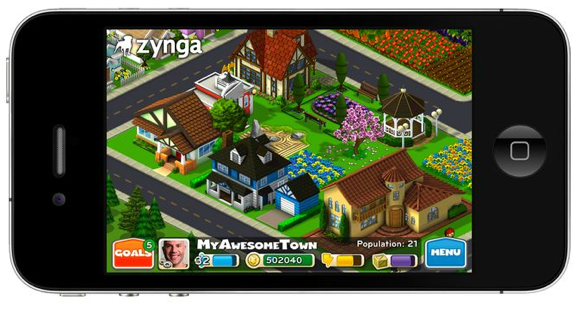 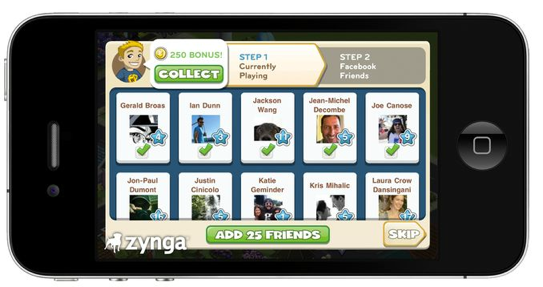