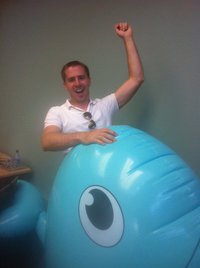 In April 2010, Facebook quickly swooped in and bought the Y Combinator-backed Divvyshot when they were in the midst of raising an angel round of funding. The reason why was clear: the small team had created a cool site for sharing photos with groups, something Facebook was going to be focusing on. But it was a pure talent acqusition, Facebook’s speciality. And it was founder Sam Odio in particular that they were interested in.

We heard the news today and reached out to Facebook to confirm. But I think they’re mad at us for some reason. No matter, Odio’s own going-away party page on Facebook confirms the move. (We’ve also reached out to Odio about why he’s leaving and what he’s up to next, but have yet to hear back.)

Here’s why this is also a little weird. As we just unveiled to the world, Facebook is in the midst of a massive mobile photos revamp. And Odio is the lead product manager for Photos. That doesn’t seem to make a lot of sense.

But perhaps Odio just hit his first post-acquisition cliff and decided he wanted to work on something new.

Worth noting, on his going-away drinks page, it reads:

Sam is leaving Facebook this Friday, let’s give him a proper send-off. Drinks will be had, good times remembered, and perhaps we’ll even document the event on some photo sharing site.

Do we think that means Facebook proper, or the new thing they’re working on?