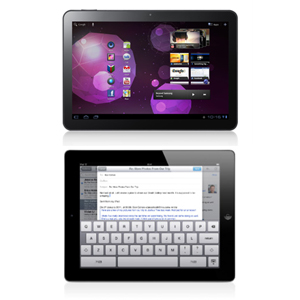 Remember that one time when Samsung asked Apple to hand over the iPhone 5 and iPad 3 for legal inspection, just in case the companies’ future products crossed the line between similar and strikingly similar yet again? Well, Apple didn’t like that very much, and has called the request “copyist.”

It all started back in April, when Apple saw some bothersome similarities between Apple’s iPad 2 and iPhone 4 and certain products from Samsung’s Galaxy and Infuse lines of products. Apple sued, Samsung counter-sued, and now we’re basically in a vicious cycle of “which came first: the iPhone 4 or the Samsung Galaxy S II?”

As part of the lawsuit, a federal judge ordered Samsung to give Apple access to the Galaxy S II, the Galaxy Tab 8.9 and 10.1, the Infuse 4G, and the Infuse 4G LTE, so that the Apple legal team could determine if its intellectual property rights had been violated. Two of the five devices had yet to be released, but were still leaked on to the web with descriptions and photos. In other words, everything Apple got a peak at was no longer a secret.

Samsung, on the other hand, went for the jugular in its request to view products, asking for the next-generation iPhone and iPad – two products locked tightly away in a Cupertino vault, we’d assume. Now, nearly two weeks later, Apple has responded with a filing to block the request:

Samsung’s Motion to Compel is an improper attempt to harass Apple by demanding production of extremely sensitive trade secrets that have no relevance to Apple’s likelihood of success on its infringement claims or to a preliminary injunction motion. Apple made a compelling showing in its motion to expedite discovery that Apple needs samples of products that Samsung has already announced, distributed, and described, so that Apple can evaluate whether to file a preliminary injunction motion against those products, which look strikingly similar to the distinctive trade dress of Apple’s current products. Samsung has made no such showing about Apple’s future products. Therefore, Samsung’s Motion to Compel should be denied.

Samsung’s argument goes a little like this: If the next-gen iPad and iPhone don’t wear the same design “dress” that Samsung has been accused of copying, then Apple can’t justifiably accuse Samsung of stealing consistently Apple-esque designs. On the other hand, Apple claims that the suit is centered around current products, and that future products bear no relevance to the case at hand.

Samsung promised in its request to play by the same rules Apple is required to follow, and only allow outside legal counsel to inspect Apple’s products. But Apple isn’t likely to take this request lying down, knowing full well that anticipation is part of what makes the iPhone and iPad so buzz-worthy. June 17 is the deadline for Samsung to hand over those products for Apple’s inspection, and we’ll know in the next few weeks whether a judge will agree with Samsung’s request.