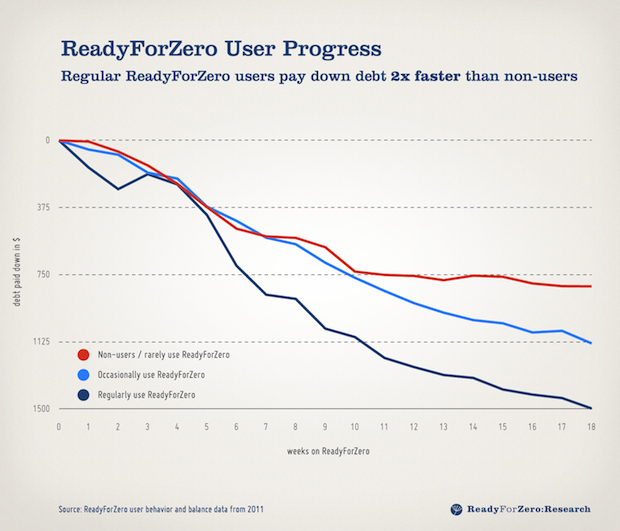 Most charts I get sent are up and to the right. Not this one.

The chart ReadyForZero sent me (above) goes down and to the right. This is meant to showcase just how much debt the service is helping users eliminate. They’re the blue lines on the bottom. It’s like golf, the lower the better.

All told, ReadyForZero is already helping their users eliminate some $42 million in credit card debt since the beta launch just four months ago. We’ve covered the Y Combinator alum a few times over the past several months for a good reason: it’s a solid and much needed service. And today, investors are putting even more of their money where the credit card debt is disappearing, giving ReadyForZero a fresh $4.5 million Series A.

“This financing round will help us build more automation, engagement and optimization into the product — things like, managing your personal debt and credit reputation the same way you manage your investments and net worth,” co-founder Rod Ebrahimi says. “We hope this financing also furthers our image as a credible and legitimate option among within a notoriously ‘shady’ industry,” he continues, also noting that they’re hiring ” aggressively”.

“There is no doubt that there is a big opportunity here,” Ebrahimi says. How big? Well, some 77 percent of American families have debt. And the Federal Reserve pegs the total consumer debt amount at $2.4 trillion. Not exactly chump change — not at all.

And ReadyForZero obviously has some ideas on how to make money themselves while at the same time helping people. In fact, they’re already taking in some revenue. “We’ve actually booked some revenue and facilitated over $250k in loans
through our launch partner, Lending Club. To be quite honest, we have been floored by the effectiveness of our first simple version,” Ebrahimi says.

Perhaps they shouldn’t be floored though, as their regular users are paying down debts two times faster than if they tried to do it without managing it at all. “The company is already making a meaningful impact on people’s lives,” Polaris’ Prinicipal Ryan Spoon says. Indeed.