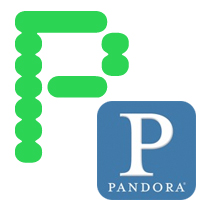 As we reported earlier, Pandora will start trading tomorrow on the New York Stock Exchange under the single letter symbol “P”. By doing so, it becomes the first Silicon Valley consumer Internet company to join the exclusive one-letter stock ticker symbol club.

That club was once reserved for the big blue-chip industrial companies: Chrysler (C), Ford (F), Sears (S), U.S. Steel (X), and Woolworth (Z). Of that list, only Ford and U.S. Steel remain. Chrysler was acquired by Daimler and lost the C to Citibank. Sears lost the S to Sprint Nextel. Woolworth went out of business.

Of course, there are already several tech companies in the single letter club. Agilent Technologies (A), NetSuite (N), Sprint Nextel (S), and AT&T (T). But none are pure consumer-based Internet companies.

Zillow, the real-estate website, applied for the NASDAQ ticker symbol Z in a filing last month. But, it hasn’t started trading yet. Pandora has beaten them in the race.

In the past, the NYSE has said it was holding M for Microsoft (MSFT) and I for Intel (INTC). M is Macy’s but I is open. There are no signs Microsoft or Intel are planning a change.

There was also talk at one time that Yahoo (YHOO) might take the Y spot, which is now at Alleghany. Go figure. Perhaps because it ends in Y.

What about possible stock symbols for Facebook, Twitter, or Groupon. F is already Ford, T is AT&T, and G is Genpact. In Groupon’s filing, they wrote they expect to apply for the symbol GRPN. Symbols don’t usually change unless there is an acquisition, or the company goes bust, so those companies would need to pick something else.

At one time, stock symbols were printed on the ticker tape and handwritten on transaction slips. So, shorter was faster. Today stock symbols have less importance, but the single letter companies can still say they are part of a very exclusive club.

My grandfather used to try to fool people with a joke saying of the thousands and thousands of companies traded on the stock market, how many have a single letter as a ticker symbol? He always enjoyed when someone not thinking clearly might say 50 or 100. He would proudly tell them there can only be 26. With Pandora getting added tomorrow, there will only be 20.