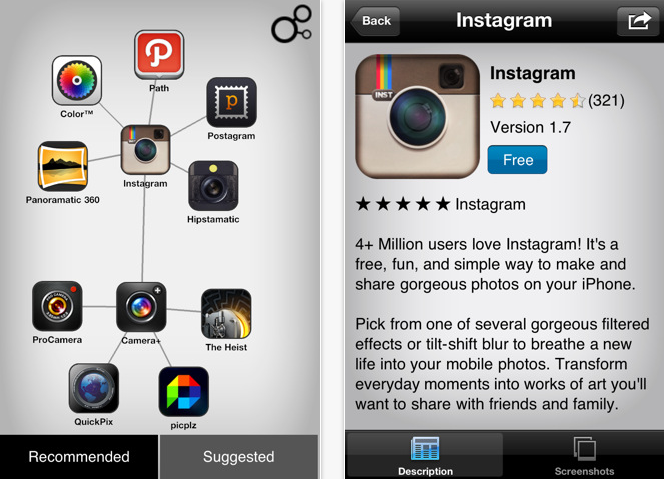 At WWDC 2011, Apple announced that there are now more than 400K apps in its app store (and that more than 500K have been approved). The Android Marketplace has around 300K apps and is growing fast. The point is: There are a lot apps out there already, and more hit app stores every day. They’re going like hotcakes. But finding and discovering new apps that you actually care about? Eh, not so easy. Of course, it’s not for lack of trying. There are some awesome tools out there already trying to direct the fire hose and filter the noise.

Chomp, for example, is trying to become the Google search for apps. Zwapp, Frenzapp, and Appsfire are all bringing social to app discovery, while Heyzap is busy trying to kill game discovery. Today, Discovr adds a dy-no-mite app discovery tool to the crowd, going after the user experience problem in an awesome, though somewhat mathematical way: Interactive graphs.

Back in January, Discovr launched a cool new app for the iPad that displayed an interactive map of the music world that displays, among other things, connections between bands and artists. It also allows the user, with a few quick taps, to view musicians’ videos on YouTube and more. In fact, the sounded appealing enough that it attracted 150K downloads in three days. Holy tamale. Today, Discovr is applying its music discovery and visualization model for iOS to apps, and it’s just as good, if not better. Granted, I’m a sucker for creative design and spatial data-aggregation tools. Nerdy as charged.

Discovr Apps is an interactive map of the 400K+ apps on the App Store. How does it work? Search for your favorite app, or choose one from Discovr’s featured apps, and bing-bang-boom, the app will show your app of choice in an interconnected network of apps that are linked based on their similarities. The similarities, like so many other recommendation services today, is a combo of machine algorithms and human curation.

The networks can be expanded on as you go, and if the page were large enough, you could probably create a massive, mind-melting map of all the apps on the app store. Obviously, in offering an interactive map as a method of app discovery, user experience is critical. If the interface sucks, the app is worthless. Discovr CEO Dave McKinney assures me that UX has been top priority for the startup since day 1. And from my quick demo, the interface is awesome: Smooth and seamless.

McKinney said that part of their secret to offering a good UX, especially if you’re going for a graphical presentation of data, is having a deep understanding of graphical interfaces and graph theory. Their solution? Bring in a guy with a PhD in graph theory. Tamas Nepusz is a doctor of graph theory that used to work at Last.fm as a research engineer, and he works exclusively on the graph code. It seems to be working.

So, when you find an app you like, you can read app descriptions, check out screenshots and ratings, or buy the app directly from the app store — or you can share your favorite apps and maps with your friends via Twitter, Facebook, or email.

In addition to Discovr’s human+machine approach, the startup wants people from all over the world to contribute to the data set and plans to add data-tuning from the crowd to make its recommendations even better. Oh, and an Android app is not on the way. It looks like Discovr Apps is purely iOS. Sorry, Google.

For more, check out the video at the below.