On Tuesday, ClearEdge Power— a cleantech startup that makes 5-kilowatt stationary fuel cells— announced that it won a $2.8 million grant from the Pacific Northwest National Laboratory (PNNL) to gets its technology out to the market more quickly. Targeted customers for ClearEdge Power include the owners and operators of hotels, groceries, schools, medical centers and fast food restaurants, among other light industrial power users.

The ClearEdge5 fuel cell (image, below) is about the size of a regular home refrigerator and produces power from natural gas. It is also designed to recycle the heat it generates for use within a facility where it is installed. Heat generated by the fuel cells’ power production can be harnessed, for example, to warm up a pool, a laundry room or the air in a building.

The PNNL grant project is part of the U.S. Department of Energy’s Fuel Cell Technologies Program, and is one of a slew of activities designed to: “support the development and deployment of hydrogen and fuel cell technologies, [domestically]” according to a PNNL press statement. Through the grant, PNNL funds up to 50 percent of the total project cost for each system ClearEdge Power installs. 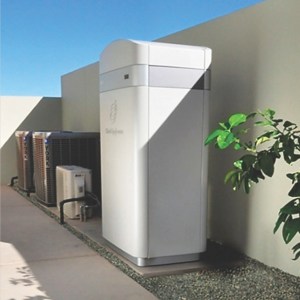 Given $2.8 million in funding, ClearEdge Power agreed to install 38 systems for ten organizations that the company hand-picked because they were reputed sustainability leaders in their industries or geographic regions. As part of the deal, the organizations that get the half-priced systems and services agreed to allow PNNL access to their fuel cell’s performance data for five years [updated: Jun. 14, 2011 7:45 p.m. ET].

The grant is a first-of-its-kind award, according to PNNL project manager Mike Rinker. Most D.O.E. grants are to advance research and development and manufacturing, he explained.

Rinker’s team chose ClearEdge Power for the grant because, he said, “They had a system that was commercially available already in the 5-kilowatt to 100-kilowatt range, and could be deployed quickly.”

The ClearEdge5 uses an electrochemical process to convert natural gas (or propane) to electricity and heat. It’s a smaller unit than those offered by Bloom Energy, UTC Power or Fuel Cell Energy.

The company claims its systems: reduces the environmental impact of producing electricity by reducing carbon dioxide emissions by about 35 to 40 percent compared to traditional combustion power generation, and by avoiding the emission of volatile organic compounds, ash and particulates, to trace levels.

“It’s hard to determine which sectors within the category of light industrial power users are the biggest consumers of energy from fossil fuels. It varies regionally, for one. Most companies in this category are grid-connected so they take what the utility can give them.

In Southern California and Northern California, a lot of that power comes from coal*. That’s why it makes sense to introduce businesses in this area, and in this category, or in areas that have access to a natural gas pipeline to fuel cell alternatives.

With companies like a 24-7 medical center, a hotel or a fast food restaurant that needs reliable electricity and heat, constantly, you can use both the heat and the power generated by a fuel cell to offset greenohouse gases, and make the case for the efficiency for this technology.

We’ll be starting to track the data in September this year.”

[*Ed’s note: coal is generally regarded as one of the most polluting forms of energy, if one of the more affordable, in the U.S.]

According to Mike Upp, vice president of marketing at ClearEdge Power, his company currently has 225 full-time employees, has so far sold 100 fuel cell systems and is headquartered in Hillsboro, Oregon with plans to expand operations on the east coast this year.