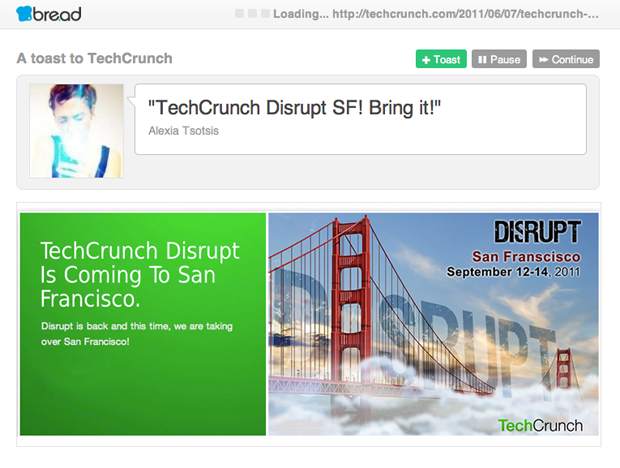 Part of the series of music and entertainment related startups backed by Lady Gaga’s manager Troy Carter, Bre.ad is a URL shortner that hopes to be your own personal billboard. The concept behind Bre.ad is that users can create “toasts,” or their own personalized advertisements for causes, brands or themselves and gain exposure for those toasts by shortening and sharing links using the service (for example). Users can also choose to share other people’s toasts through the site.

Users who sign up for an account on Bre.ad can upload their custom image and message and can shorten a link with Bre.ad by either typing Bre.ad/ in front of the link or using the interface on the site. When users share the link on Facebook and Twitter, their friends and followers will see their “toasts,” or the Bre.ad billboards, for five seconds when they click on the link. Users can also follow people on Bre.ad to keep tabs on their link sharing activity onsite.

Founder Alan Chan tells me that despite a glutted URL shortener market, demand for a platform that allows you to market products through sharing links is high and 10 K people signed up in the first four days. Beta users shared a Bre.ad link every 10 to 15 minutes on Twitter and the initial beta testing crop included Lady Gaga, and 50 Cent. 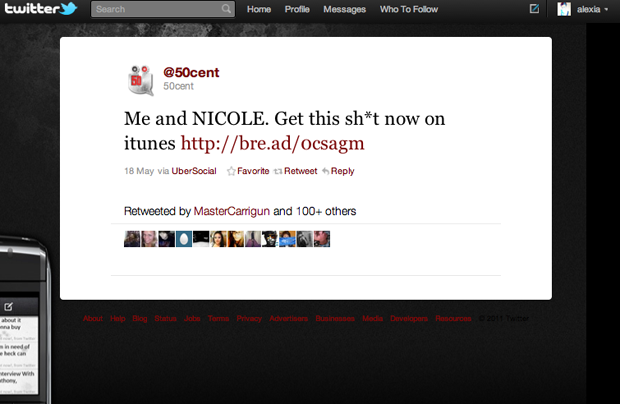 While there are plenty of alternative URL shorteners such as Bit.ly and Goo.gl and even Twitter’s own offering, Chan says that the competitive advantage of Bre.ad is the digital billboard/ad part, what he calls a “visual extension of your Twitter feed.” He likens the startup to cross between About.me and Bit.ly

Chan hopes eventually to monetize the service by providing premium features like user acquisition analytics, optimization and other perks to people who want to promote content through the URL shortener, “If you’re a clothing company you can put your messaging in front of a cool music video … If I’m following you then I care about the things you care about, it’ s like a visual tweet at that point.”

The first 1000 TechCrunch readers who email techcrunch@bre.ad can reserve the vanity URL for themselves or their brand, for example http://bre.ad/apple.