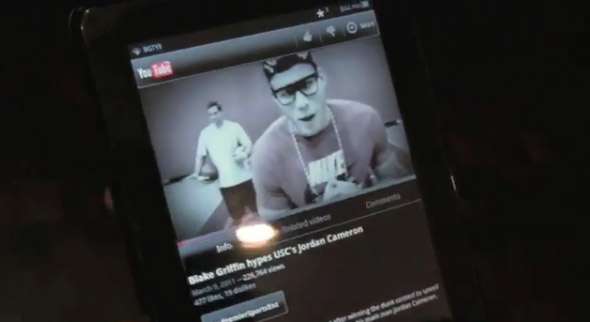 Blake Griffin, previously known for dunking over midsize Korean sedans and playing for LA’s other NBA team, just posted to his YouTube account a quick, clearly sponsored, video of the upcoming Vizio tablet announced back at CES 2011. The tablet is part of Vizio’s ecosystem dubbed VIA Plus that promises to bring the same sort user interaction across different platforms through similar apps and wireless connectivity similarly to AirPlay.

This promise at least seems to be fulfilled from the quick look although the tablet looks rather laggy even in the experienced hands of the Vizio rep. Scrolling is jittery, apps load slowly, and auto-rotation takes a good few seconds. It’s not all hateful criticism, though. Vizio is at least trying something different with VIA Plus and those that own nothing but the latest Vizio products should enjoy the additional functinality. But for the rest of us, it seems to be an unnecessary and probably pricey feature.

Of course this is a good deal of speculation based of one quick YouTube video. Perhaps the Vizio tablet will outshine the Asus Transformer and become the Android tablet to beat. After all Blake did posterize a car proving anything is possible.