Editor’s note:This guest post is part of an in-depth series looking at the daily deal industry written by Rocky Agrawal, an entrepreneur who has worked on local products since 1995.  Read Part I, Part II, and Part III also.  He blogs at reDesign and Tweets @rakeshlobster.

Imagine you’re a small business owner. You have to choose between two propositions:

I’ve been working on local for a long time and I know it’s hard to get small businesses to spend money on advertising. Really hard. Even getting $200 a month ($2,400 a year) is a high hurdle to meet.

There’s no way a business will sign up for #1. Most merchants would laugh you out of the store if you asked for $60,000.

Except they are. In droves.

Although they sound completely different, #1 and #2 are really the same—it’s the Groupon business model.

Businesses are being sold incredibly expensive advertising campaigns that are disguised as “no risk” ways to acquire new customers. In reality, there’s a lot of risk. With a newspaper ad, the maximum you can lose is the amount you paid for the ad. With Groupon, your potential losses can increase with every Groupon customer who walks through the door and put the existence of your business at risk.

Groupon is not an Internet marketing business so much as it is the equivalent of a loan sharking business. The $21,000 that the business in this example gets for running a Groupon is essentially a very, very expensive loan.  They get the cash up front, but pay for it with deep discounts over time.  (This post applies to Groupon operations in the United States and Canada; it’s different in other parts of the world.)

Traffic is not necessarily profitable traffic

Groupon can clearly deliver customers. But in order to know if it makes financial sense as a customer acquisition tool, merchants need to know two key numbers:

But for most businesses, these critical numbers are impossible to know. Groupons haven’t been out long enough to generate this data.  And Groupon’s tracking methods aren’t collecting this data. (My intuition is that Groupon doesn’t want to know.)

Groupon touts a win-win proposition. But the reality is that Groupon usually wins and merchants usually lose. The merchant agreement is one of the most lopsided I’ve seen.

It’s rare that Groupon loses . . . until merchants figure out how to cheat.

Underlying Groupon’s success is an auction. It’s not explicit, like Google’s AdWords bidding platform, but the economic effects are similar. The fact that Groupon runs daily deals creates artificial scarcity and drives up pricing to absurd levels. Even with four deals a day in a given market, you’re talking about fewer than 1,500 deals a year.

All of this creates an incentive to drive up Groupon’s revenues. It also provides an incentive for salespeople to sell bigger and bigger deals, some of which might not be suitable for a small business. Because of all the hype around Groupon, salespeople are able to use the “Who’s Who” model—sell what an honor it is to be specially selected to be featured on Groupon.

Groupon’s process for selecting which deals it runs has little transparency. It’s not always the highest bids that win; sometimes, lower value bids win just to keep subscribers opening their emails. (In this case, think of merchants bidding with discounts, so the deeper the discount, the higher the bid).  I’ve also heard from merchants who say Groupon has changed their deals at the last minute to make them more profitable for Groupon.

Many small businesses are struggling for cash and the Groupon sales pitch resonates. Marketing with no upfront payment. You get cash within days. A steady stream of customers. This is not a new idea. Rewards Network has been offering restaurants cash upfront in exchange for discounted meals over time. (But on more generous terms than Groupon.)

Groupon’s S-1 calls tough economic times a risk; but the recession was really their opportunity. As other forms of credit dried up, struggling businesses jumped at the chance to get cash now in exchange for discounting their product later. The real risk for Groupon is that the economy improves to the point that businesses don’t have to resort to deep discounting. 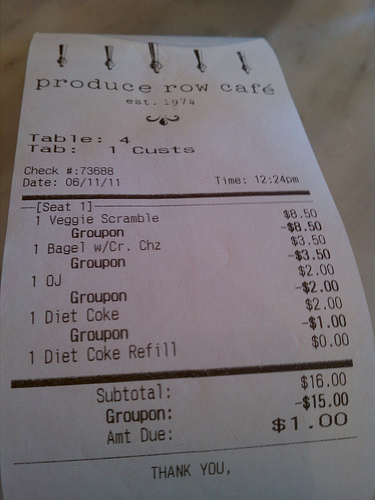 Some of the analysis of Groupon’s long term prospects has pointed to repeat Groupon offers from merchants as evidence of a viable long-term model.

I had been struggling to understand why some businesses ran repeat Groupons or cycled among the various daily deal vendors, given that the economics clearly suck if you can’t drive repeat traffic. Some let the same customer buy 3 or more of the same deal. That’s a clear no-no for a loss-leader designed to acquire new customers.

A conversation with Forkfly (a Groupon Now competitor) CEO Paul Wagner was enlightening. He suggested that they were doing what struggling families do when they max out a credit card—they get another one.

That makes perfect sense. Revenue from subsequent daily deals help pay for the obligations created by the first one.

Receipts look like the one at right. Lots of product going out, staff to pay and little cash coming in. Taking out another Groupon loan is a quick fix. (If I were a sales rep, I’d have that date marked on my calendar for follow up. “I know we did 50/50 last time, but I’m thinking Groupon gets 70% this time.”)

How would you exploit an overpriced loan? Don’t pay it back.

Assume that you’re a business that is unscrupulous and you’re looking to make a quick buck. You could create a wildly generous deal that would sell like crazy. In about 30 days, you’ll have 2/3 of your share of the deal. Then you shut down operations.

It also works for businesses that are just having a tough time. As critical as I am of Groupon, the slam dunk case is to sign up with Groupon if you’re going bankrupt. I strongly encourage every business that is about to go under to call Groupon. (Don’t tell them Rocky sent you.) It makes total financial sense—as a Hail Mary play. If you’re lucky, the upfront cash will be enough to help you stay afloat. If not, well, you were already going out of business. It may be your best option. In the short term, you’re actually helping Groupon because they’re being valued on revenue and no one is taking into account risk.

Groupon is essentially holding a portfolio of loans backed by the receivables of small businesses. If a business goes under, consumers will come back to Groupon for their money back. Unless Groupon is actually doing credit assessments on businesses that it chooses to feature, this is a big risk for Groupon.

The onerous terms for participating in Groupon also create an adverse selection problem. The most successful businesses don’t need Groupon for customer acquisition or financing.

The assumption is that nothing will go wrong and all of these “loans” will be paid back. (At least the subprime mortgage lenders were able to sell that risk off to Wall Street and AIG.)

Like the mortgage lenders, Groupon doesn’t know exactly how much risk it has piled up. Because some merchants track redemptions on paper, Groupon has no way of knowing how many unredeemed Groupons are outstanding. If a business goes under and the records are unavailable, every buyer of that Groupon could try to make a claim against it. (The risk is mitigated by the fact that a lot of redemption occurs within the first 60 days, but we don’t know how much.)

Google, with more than $36 billion in cash on hand, is uncomfortable enough with that risk that it dumps it onto Google Offers buyers. Groupon could mitigate this risk by changing its terms and conditions so that the consumer is responsible in case a merchant goes bankrupt.

Where does Groupon get all the money to give to these merchants? Credit cards—yours. Groupon gets paid within a couple of days by its banks. It then takes that money and gives it to the merchant in three chunks. From Groupon’s S-1:

Our merchant payment terms and revenue growth have provided us with operating cash flow to fund our working capital needs. Our merchant arrangements are generally structured such that we collect cash up front when our customers purchase Groupons and make payments to our merchants at a subsequent date. In North America, we typically pay our merchants in installments within sixty days after the Groupon is sold.

We use the operating cash flow provided by our merchant payment terms and revenue growth to fund our working capital needs. If we offer our merchants more favorable or accelerated payment terms or our revenue does not continue to grow in the future, our operating cash flow and results of operations could be adversely impacted and we may have to seek alternative financing to fund our working capital needs.

Translation: They’re using money from new deals to pay for previous deals. They need to keep growing revenue. As of March 31, they owed merchants $290.7 million.

In the agreement I’ve seen, the first installment is 33% in 5 days. If they have to pay merchants faster, that could lead to problems.

And Google might force that to happen. According to Google Offers’ payment terms, merchants receive 80% of their share in 4 days—more than twice as much, 1 day earlier.

There’s no way that was an accident.

If Groupon matches these payment terms, they’ll need cash faster and need to grow faster. (Google Offers accelerates the rate at which Groupon’s scheme has to draw in new suckers.)  If Groupon doesn’t match, it gives Google a key differentiator to win deals. If those businesses  go with Google’s more generous terms, that too will starve Groupon of the cash it needs to pay earlier merchants.

Now here’s the crazy part.  Not only is Groupon effectively giving loans to merchants, but it also works the other way around.  The merchant is on the hook for the entire value of those deals until Groupon pays the merchant back its portion.  Unlike other loan providers, the merchant is making a short-term loan to Groupon. (Not technically, but effectively.) They buy inventory in advance of the Groupon run. They also serve the initial rush of customers. The business is in a hole before they get their 30- and 60-day Groupon payouts.

While the chances might be small, Groupon merchants should know that they’re taking on the risk of Groupon’s collapse. If Groupon collapses, a lot of small merchants could be left holding the bag.

If you know of a business that closed after running a Groupon or other daily deal, please send an email with the name of the business to dailydeals@agrawals.org. And remember, correlation is not causation.