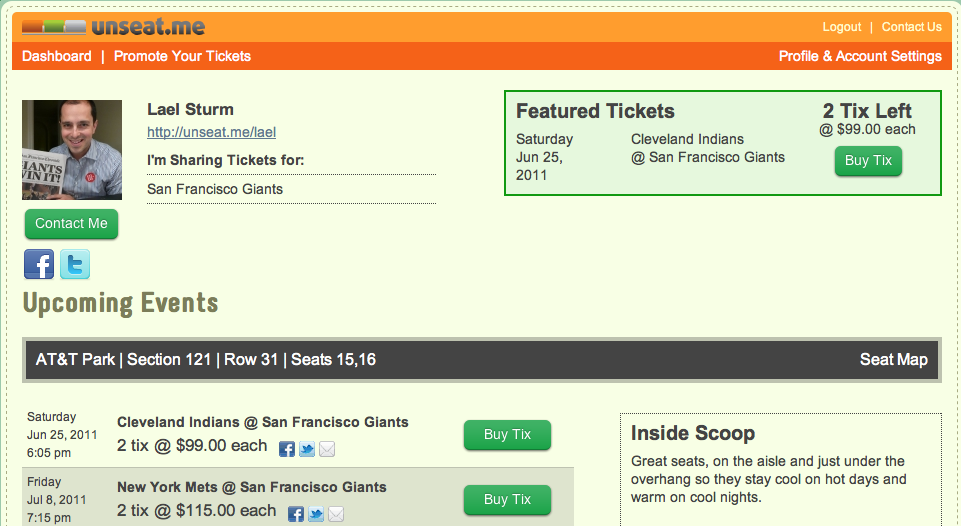 As much as a season ticket holder would like to make it to every single game of their team’s season, most of the time that’s just not in the cards — at least not while keeping a job and a family. So, when one has to pass on a game and wants to make a little of the money back, one might go set up a seller account at StubHub, RazorGator, Tickets.com, or just list them on craigslist.

With millions upon millions of listings between them, these sites all offer great choices for buyers and sellers alike. And, speaking at least for StubHub, tickets are free to list. Shipping is easy, or can be done quickly and digitally (depending on how you choose to list them), and you don’t have to get into a conversation with a buyer like you might on eBay or craigslist (i.e. it has confidentiality cred), and there’s a secure payment system already built in. But it’s not all sunshine and kitty cats. As a seller, StubHub is going to take a 15 percent commission, and for some people, the anonymity and confidentiality can be a limiting part of the ticket exchange.

It just so happens that there are a lot of people who have season tickets but don’t necessarily want to sell tickets to a stranger anonymously through a sometimes needlessly complicated transaction process. Enter: Unseat.me, a social layer built on top of StubHub that gives every ticket seller the tools to be a broker, taking advantage of the ticket marketplace as a payment processing and ticket fulfillment engine.

Unseat.me Founder Lael Sturm conceived the idea for his startup from a simple need: He is a San Francisco Giants season ticket holder, and he wanted to sell more of his tickets to people he trusted, without the fuss and without the anonymity — and make some money while doing so.

Sturm said that his intent is not to compete with StubHub and other secondary ticket markets but to supplement them and offer sellers more options. So, for example, when a user sets up an Unseat.me account they input their season ticket seat info. Unseat.me then does an API call to see if any of those tickets are listed in StubHub, at which point the seller can just connect Unseat.me with their StubHub-listed tickets, through a simple “Buy Tix” button (which you can see in the image above). When a buyer clicks on the button, they are redirected to StubHub, which then acts as the payment and fulfillment system.

But Unseat.me also presents the remaining schedule for user’s team with a ‘Display/Don’t Display’ toggle button. If the user chooses to display the games, he or she can also manually input the price and quantity. That game will then appear on the frond end with a “Contact Me” button that generates an email to the page owner. The buyer and seller can then arrange to meet in person. For users that prefer to sell direct, a la Craigslist, this is the solution for them.

By not competing directly with StubHub, Unseat.me can remain in an agnostic position, allowing the startup to work with all the secondary ticket markets. In fact, Sturm said the startup is close to deals with several of the other markets, though he declined to say which. Remaining agnostic also allows Unseat.me to stay out of sticky exclusive agreements, like the $300 million deal recently forged between StubHub and MLB, for example.

The other primary focus of Unseat.me is to offer as many ways as possible for season ticket holders to go to their friends, families, and colleagues first. Unseat.me allows you to share your tickets on Facebook and Twitter right from the listing. Sturm also said that he’s considering adding LinkedIn, especially if they find serious demand among corporate ticket holders.

The founder also said that startups like Disrupt NYC finalist Sonar have spurred him to think about the value of proximity and geolocation at venues, as this could be a powerful tool to leverage in bringing people together to share tickets. GroupMe (and other group messaging services) could also offer interesting tools for bringing people together and cutting through the noise.

When I asked Sturm if he had considered talking to StubHub about adding an Unseat.me button to StubHub listings, he said that it was a conversation he’d love to have with the ticket giant, but in the meantime, Unseat.me is very close to announcing similar integration with one of StubHub’s competitors. So there. What’s more, Facebook Connect integration should be right around the corner as well.

As to funding, the startup is mostly bootstrapped, with a bit of angel financing at this point, though Sturm said he’s in the process of raising a larger seed round and has had some investor interest. Revenue model? Unseat.me is still in the proof-of-concept phase, i.e. it’s all for free, but Sturm said he’s considering everything from affiliate fees from secondary ticket markets, a freemium version that provides additional functionality, fee-based promotional tools, or data products.

It’s still very early-stage at this point, but Unseat.me has a few interesting things going for it, especially as it will be expanding to NFL tickets soon, and I’m looking forward to see where it goes next. Stay tuned for more.

Update: As of June 28, Unseat.me has added NFL season tickets to its service, and has also rolled out Facebook Connect. Up to this point, an invite code was required to join and log in, but this wall is no longer in play, as Unseat.me has lifted the veil and opened its ticketing service up to all those with an email address or a Facebook account. Excellent.