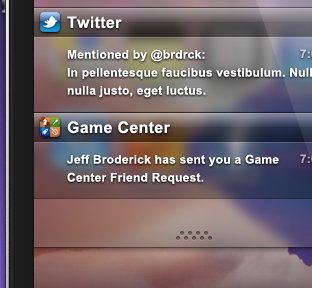 It’s the Circle of Life, friends.

Apple releases a new build of iOS. Jailbreakers find a way in, and add something really cool that makes jailbreaking worthwhile. Sooner or later, Apple gets around to replicating said really-cool-feature in an official means, and everyone says “Wow! Now there’s pretty much no reason to jailbreak!” Then Jailbreakers take that feature and make it even cooler.

The latest feature going through the cycle: Notifications. We called the jailbreak-only MobileNotifier modification the one thing that would make “anyone want to jailbreak”; Apple showed their agreement by tossing a strikingly similar implementation into iOS 5 and hiring the project’s lead developer. In turn, jailbreakers have gone and made the whole thing even better.

Much as jailbreakers were customizing their iPhone’s homescreen backgrounds long before such things were Apple-endorsed, they’re now able to skin the Notifications Center drop down as they please.

They’re not stopping at visual remixes, though. Just about every developer’s first reaction to sliding down the Notifications Center pull-down and seeing the Weather and Stocks widgets floating inside is “Cool! When can I make my own?” — and sure enough, jailbreakers have found a way.

Modifier Will Homer (@WillFour20 on Twitter) released some basic template code for developers to build their own widgets. Shortly thereafter, Italian modder @Qwertyoruiop released UISettings, a one-click-access settings widget which allows the jailbreaker to toggle WiFi, Bluetooth, Airplane mode, set brightness, and reset their device’s springboard from the pulldown.

Meanwhile, dev Aaron Wright is working on a widget that show’s the Album Art and Track Info for any currently playing song:

Neat, right? Now, the only question we’ve got: how long before Apple goes ahead and opens this up to third-party developers, no jailbreak-required?