The tale of graFighters is one of a Kickstarter project that went wrong and then went oh so right. Last fall founders Eric Cleckner and Dave Chenell tried to raise $20K on Kickstarter for the “first online fighting game for your sketches,” but barely raised $3K. Luckily for them, a German investor poking around Kickstarter for projects stumbled across the project and called Chenell to invest. The pair ended up raising a $200K round, 10x their original Kickstarter ask.

GraFighters is a browser-based game that lets you upload your own sketches and customize them for battle with other users’ sketches. If you don’t have any drawings you’d particularly like to see duel lying around your computer you can always use the games pre-existing characters, which include my beloved boss Michael Arrington, gaming legend and VC Bing Gordon, the infamous @Pud or the myriad of previously uploaded made up characters like “Barnaby Bear” and “Floppysaurus.”

As you can see in the demo video above (created at Union Square Ventures per Fred Wilson’s request) the whole endeavor is tons of fun. And while the game is still in private beta as the two co-founders iron out the bugs, TechCrunch readers can include something about TechCrunch in the “Why do you want to graFight?” and get in earlier — When graFighters is ready to handle more beta testers.

The game opens to the public in September. 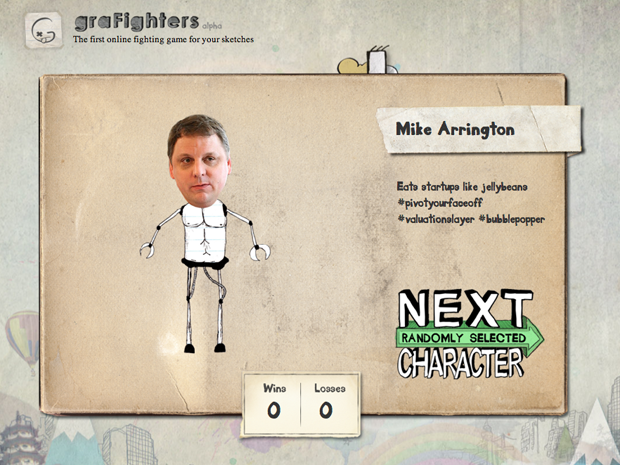